Assam NRC draft: From the taboo of exclusion to political slug fest- NRC as it unfolds 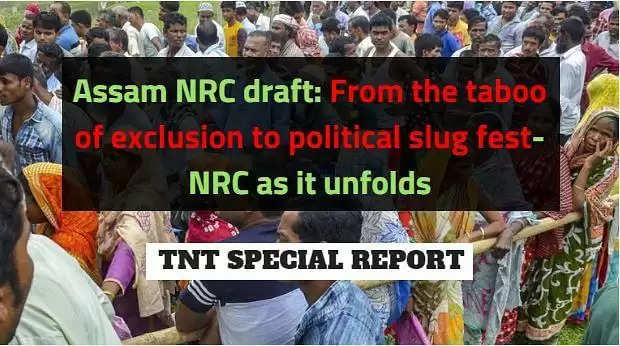 The much anticipated draft of the updated National Registrar of Citizens (NRC) was released today at Guwahati amid heavy security throughout the state and an extensive campaign by the Assam government and frequent appeals by top ministers not to fall prey to rumours and that no one will be deported or arrested based on it.

In Assam the NRC is being updated after 1951, with March 24, 1971 as the cut-off date, and it has been an exercise which involved about 55 thousand government officials across the state. The Assam government had also identified several sensitive areas in the state, and in many such areas section 144 were  imposed.

The draft NRC was released at 10 am on July 30 at a press Conference at Guwahati which was addressed by Sailesh, Registrar General and Census Commissioner, government of India, Satyendra Garg, joint secretary at the Ministry of Home Affairs, and Prateek Hajela, State coordinator of NRC, Assam.

Sailesh announced the figures–40,07707 (forty lakh, seven thousand, seven hundred and eight) persons have been excluded from the final draft.

Sailesh also said that this is just a draft, and now the process of accepting claims and objections will begin.

"The process of receiving claims and objections would start from August 30 and those would be received up to September 28. Everyone, whose name has been left out will be given opportunity to submit documents and prove their claim," said Hajela.

The first draft of the NRC was published on January 1, this year which contained 1.9 crore names.

Hours after the release of the draft NRC, Assam chief minister Sarbananda Sonowal, addressing a press conference said that there is no need for anyone to panic and assured the full support of the government to ensure that none of the genuine Indian citizens gets left out of the NRC.

To calm the growing tension among the residents of the state, the Assam government also ruled out any arrest, detention or deportation based on the draft NRC.

Speaking to the media, Assam finance minister and government spokesperson, Himanta Biswa Sarma said that, "No-one will be arrested or put in detention based on the draft NRC, and no one will be stripped of any benefits or entitlements which he or she might be enjoying even if his name doesn't appear in the draft document".

The demand for updation of the NRC was made during the signing of the Assam Accord in 1985, but things started to actually move forward in 2005 after a meeting between the Central government, Assam government and the influential All Assam Students Union (AASU) on May 5 this year.

Incidentally the Congress was in power both at the Centre and in Assam during that period.

The legal tangle came to the issue in 2009 when an NGO, Assam Public Works filed a petition at the Supreme Court for updation of the NRC and also for deletion of the names of all the illegal migrants from the voter list in the state.

In 2010 the Assam government had made an attempt to update the NRC as per a pilot project in three districts, however it had to be stopped after massive protests by a few groups, including the All Assam Minority Students Union (AAMSU) which led to the death of 4 people and injury to over 100, besides damage to property worth several lakhs.

However  in May 2013, the Supreme Court directed the then central government to finalise the modalities of updating the NRC by July 16, 2013. The distribution and receipt of the NRC application forms and related documents began in 2015, and the authorities accepted those till August 31, 2015, and the process of verification started soon after.

Meanwhile attempts to gain politically from this sensitive issue began right after declaration of the draft NRC, and the major opposition political parties in the state have said that the government may have influenced it to suit their political agenda.

Hitting out at the BJP led government at the Centre and in Assam, the Assam Pradesh Congress Committee (APCC) president, Ripun Bora raised suspicion at the numbers declared in the NRC.

Speaking to this reporter, Bora said, "the number of people who have been left out of the NRC is huge, and it raises a lot of questions. We (the Congress party) are for a genuine NRC free of any foreigners, and this is the reason why we are worried. We think the names of many genuine Indian citizens might have got left out,"

The AIUDF, which enjoys a massive support among the Bengali speaking Muslim community in Assam has hit out at the BJP as well, and said that the NRC is being selectively updated keeping the 2019 parliamentary election in mind.

"It is a clearly devised strategy to take away the Muslim voters who votes for the AIUDF, and to consolidate the Hindu voters in favour of the BJP," said AIUDF leader and MLA, Aminul Islam.

The AGP, which is an ally of the BJP in the state, and which was formed after the Assam agitation demanding deportation of the illegal migrants from Assam has welcomed the development.

"We welcome this development but it is also important to note that no Indian citizen who deserves to be in the NRC gets left out," said senior AGP leader and party spokesperson Manoj Saikia.

The villagers in rural areas, far away from the state capital Dispur and New Delhi, however express worry and fears for their future. Immediately after the release of the draft NRC, many rushed to the NRC centres only to find that their name was not present in this draft.

Hasman Ali, a villager in the Bhurbandha village of the Morigaon district is among those who has not been able to find his name in the updated draft NRC.

Speaking over phone with this reporter, he said that he also fears that he will be boycotted in the village by his fellow neighbours.

"I have spoken to our village panchayat members and they have asked me to go to the local NRC office, however I am fearing that once the word gets out that our name is not on the draft list, we might be mocked and boycotted by all," said Ali.

There are many who have also blamed the NRC for diving people in the state.

"The NRC has created a chaotic situation in our life, and the worst problem is that our family members live in Jamunamukh, which is in Nagaon. I have been told by them that our family member's name are not there in the NRC, and that we all might be arrested. I have not told them not to believe rumours though," said Morzeena Begum, who works at Guwahati as a domestic help.

The worry among many who have not been able to find their name in NRC is a feeling of being looked down upon and booed, even if they are able to get their name in the list later on.

"There are people whose names didn't get entered in the documents. Those people now even fear going to the NRC office as they fear they might be arrested, or might even be attacked by people," said Bhupen Chandra Deka, panchayat president of the Bhurbandha Block in the Morigaon district in Assam.

The Assam government has repeatedly issued statements that it will view the issue in the most humane manner, and no harm will be done to anyone.

The writer can be reached at amarjyotiborah@gmail.com