According to the forest department, the rhino horns were preserved in six government treasuries, however, the Assam government under Sarma's leadership sought to take harsher steps in its anti-poaching campaign by the burning of the horns. 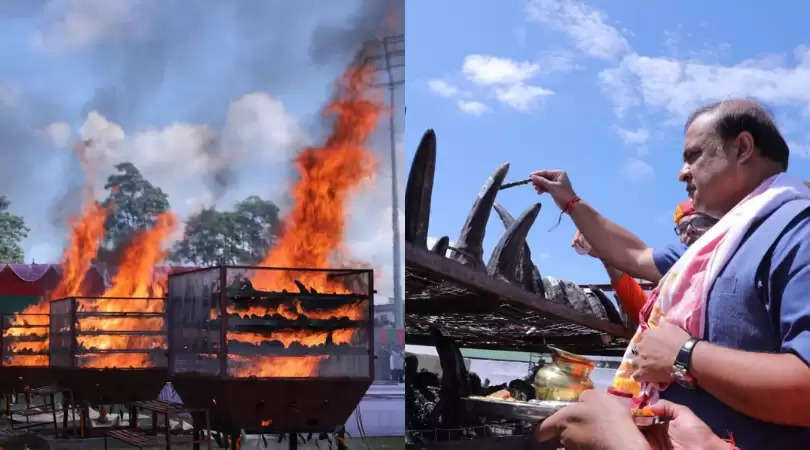 In total, the government burnt over 1,000 kilograms of rhino horns in six giant furnaces at the stadium. "In Africa, they have burned seized rhino horns, but the quantity is not that large. I think today we are setting a world record", Sarma said at the event.

Among the stockpile was a horn measuring 57 centimetres, the longest, whereas the heaviest was 3.05 kilograms, which will be preserved for academic purposes. In total, the government burnt over 1,000 kilograms of rhino horns.

According to the forest department, the rhino horns were preserved in six government treasuries, however, the Assam government under Sarma's leadership sought to take harsher steps in its anti-poaching campaign by the burning of the horns.

“Through this event, we want to convey to the world that rhino horns are just a mass of compacted hair and there is no medicinal value to them. We want to urge people not to kill these rare animals or buy their horns based on superstitions or myths. We should allow rhinos to live and grow naturally,” Sarma said, adding that the government is prepared to burn any new reconciled rhinos as well, including horns of rhinos that may have died naturally or in natural disasters.

The Congress however has come down heavily on the "śraddha" (a ceremony in honour of the dead) held by the government for the burning, accusing the Bharatiya Janata Party leadership of communalising the wildlife conservation issue. Speaking to The `Northeast Today (TNT), chairperson of media department, Assam Pradesh Congress Committee (APCC), Bobeeta Sharma asked the ruling party what is the need for bringing "priests from outside Assam" to perform the ceremony.

“Even during Namani Brahmaputra festival, the BJP brought priests from outside Assam. We have our own equally qualified Brahmin priests. So why do we need to import from other states? Do they think that our priests are not good enough? They are trying to import alien culture into Assamese society,” she said.

She also asked why shraddha for rhinos have to be performed at all. “Why give everything under the sky a religious context? So, from today have all rhinos become Hindus? Are we going to worship rhinos from now on?  What animals need are our love and protection. They should not be used as a political tool to give some religious message,” she said.

The 2,479 rhino horns burnt at the do were reconciled between 1979 and 2021 in the state through its tireless anti-poaching campaigns, which have been more and more advanced over the years in order to counter the sophistication of hunters. Besides the 2,479 burnt publicly for the first time in the Indian history of rhino conservation, another 94 have been preserved for academic purposes and public viewing, 29 will find use in court cases, and 9 were adjudged fake by a high-level committee that was tasked by the Assam Cabinet with a scientifically rigorous rhino horn re-verification process.

The State Cabinet decided to move ahead with burning on September 16.