Assam: Is NRC a secular exercise or prejudiced by politics? — By Arup Jyoti Das 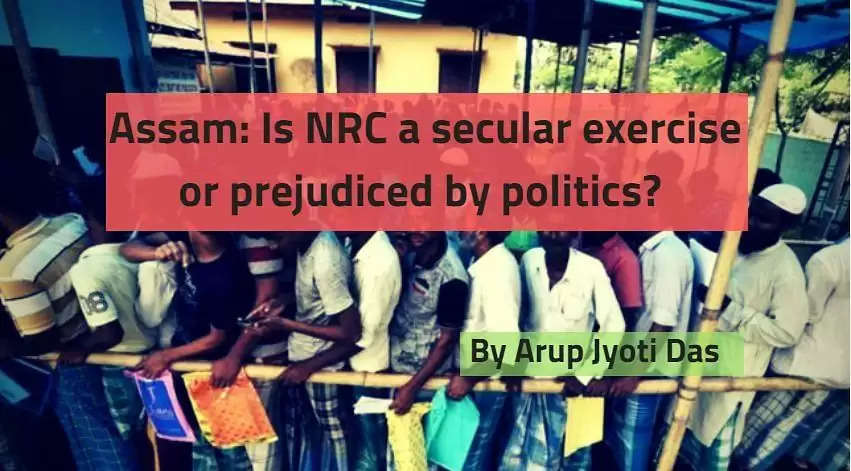 With the publication of the much-hyped final draft of National Registrar of Citizens (NRC) on July 30, a sense of relief was seen in Assam. The post final draft scenario is surprisingly peaceful contrary to the prediction of national and international media as well as government that once the draft is published, the situation would go out of control. Despite its many serious shortcomings and creating fear and uncertainty among the 40 lakhs, whose names have been left out in the final draft, NRC was not an easy task and have to be appreciated.

However, it is definitely not a celebration time and not a war won over illegal immigrants as projected by a section Assamese society. Assamese society by and large suffers from a Bangladeshi phobia and always looks for psychological victory over the issue without considering hard realities. This section also thinks that the "40 lakhs" is the missing number of illegal Bangladeshi immigrant of which Assam has been talking since many decades. The draft has serious flaws and many people belonging to Karbi, Garo, Khasi and Koch communities have been left out in the final draft due to lack of supporting documents. There are instances where son's name is there in the draft, but mother's name is missing. NRC is brutally a document based bureaucratic exercise and if someone has failed to produce necessary documents to support his/her citizenship, he/she is sure to be left out in the list. Indigenous communities are not good at maintaining proper documents in Northeast India, hence the tragic trouble.  Indeed, delivering justice to the true citizens of the county will remain the main challenge of the final NRC.

The bureaucratic challenge of a flawless NRC is not the major challenge at present. The worrying factor is the misguided intellectual exercise of a section of international and national media, as well as political stakeholders to establish NRC as an anti Muslim design of BJP.  Being executed under the supervision of Supreme Court (SC), NRC has no relation with BJP's anti-Muslim propaganda. However, since a major section of the 40 lakhs, who are not in the final draft are believed to be East Bengal origin Muslims, NRC looks like anti-Muslim project. Therefore, there is a general understanding that NRC is part of BJP's larger pan Indian anti-Muslim hatred design. BJP itself has built up an image of an anti-Muslim rightwing political party for its own activities, which are created insecurities among the Muslims of India. The present confusion of international and national media to see NRC with religious perspective is caused by BJP's own sins.

Sautik Biswas, the India Correspondent for BBC has linked the NRC project to Narendra Modi's Lok Saba campaign speech where Modi stated that illegal Bangladeshi would be deported to Bangladesh if BJP comes to power. Sautik writes in his BBC piece titled 'What happens to India's four million 'stateless' people' that Prime Minister Narendra Modi's Hindu nationalist Bharatiya Janata Party (BJP), which rules the state, has insisted in the past that illegal Muslim immigrants will be deported. Interestingly, Modi did not mention the term Muslims in his speech as written by Sautik. What BBC has done is true to many other prominent media houses, which failed to understand the indigenous perspective of Assam and looking at the issue only through religious lines.

Though BJP's agenda might not be a secret, NRC is independent of that. BJP was actually not very enthusiastic with NRC when it came to power in Assam, but constant pressure from civil society groups compelled them to cooperate with SC on NRC. BJP is not secular, but NRC is. Prateek Hajela, the NRC Coordinator rightly points out that it's not about religion or community, but all about a date 24th March, 1971. A date that is now shaping the destiny of lakhs of people in Assam, whether immigrant or indigenous.

There will be politics around NRC as it is related with numbers and vote bank. We have already seen that TMC, the Bengali nationalist party is trying to create unruly situation in Assam and West Bengal. TMC leader and West Bengal Chief Minister, Mamata Banerjee has said that NRC aims to throw away Bengalis from Assam and that will create bloodbath and civil war. She also mentioned that she would give shelter to those who would leave Assam due to their exclusion in the final draft of NRC. Like many politicians, Mamata too is not an honest politician. Before Mamata offered shelter to Bengalis in post NRC draft publication, she actually ordered administration of Jalpaiguri, Cooch Behar and Alipurduar Districts to check any entry from Assam to be triggered by NRC Draft publication. This is how she is showing her two faces. Mamata indeed need a civil war in Bengal to revive her sinking political ship.

Unfortunately, that civil war will help BJP more. Any conflicts that arise out of religious or linguistic line in Assam or Bengal will benefit BJP than TMC at present. Though BJP was initially confused about the political outcome of NRC, now it seems that they are happy with it, as so far there is no trouble in Assam. Besides, BJP's image as a patriotic party has improved due to the publication of NRC final draft. To get more benefit from NRC, Amit Shah wants to expand NRC to other states including West Bengal. Indigenous people of North Bengal are already talking about NRC in their area. If NRC is done in West Bengal, it will surely help BJP to create insecurities among Bengali Muslims.  At the same time, hope will be created for Hindu Bengalis with the promise of citizenship Bill, 2016.

As we said, there is peace in Assam in the post NRC final draft publication scenario and this is likely to prevail until the publication of the final NRC. With Muslim Majority Barpeta and Dhubri Districts having the lowest exclusion rate in NRC final draft, polarized politics won't be easy for political parties. However, the major challenge will be the humanitarian crisis once final NRC(not draft) is published. Keeping the excluded people in detention camp will not be a solution as assumed by many. This will bring serious international intervention and will be a global embarrassment for India. Deportation of illegal immigrant to Bangladesh is just an old school Assamese imagination and a current BJP propaganda. India has not signed any bilateral agreement with Bangladesh on this issue. NRC will work only as a social audit for Assam in more of an emotional manner to address its long struggle against illegal infiltration and the insecurities caused by the same. Assamese society should maturely look forward to find a way to minimize the tension between the rights of indigenous people and the rights of the people who have come from outside. By any means, peace has to be sustained.

The writer can be reached at orupkoch@gmail.com