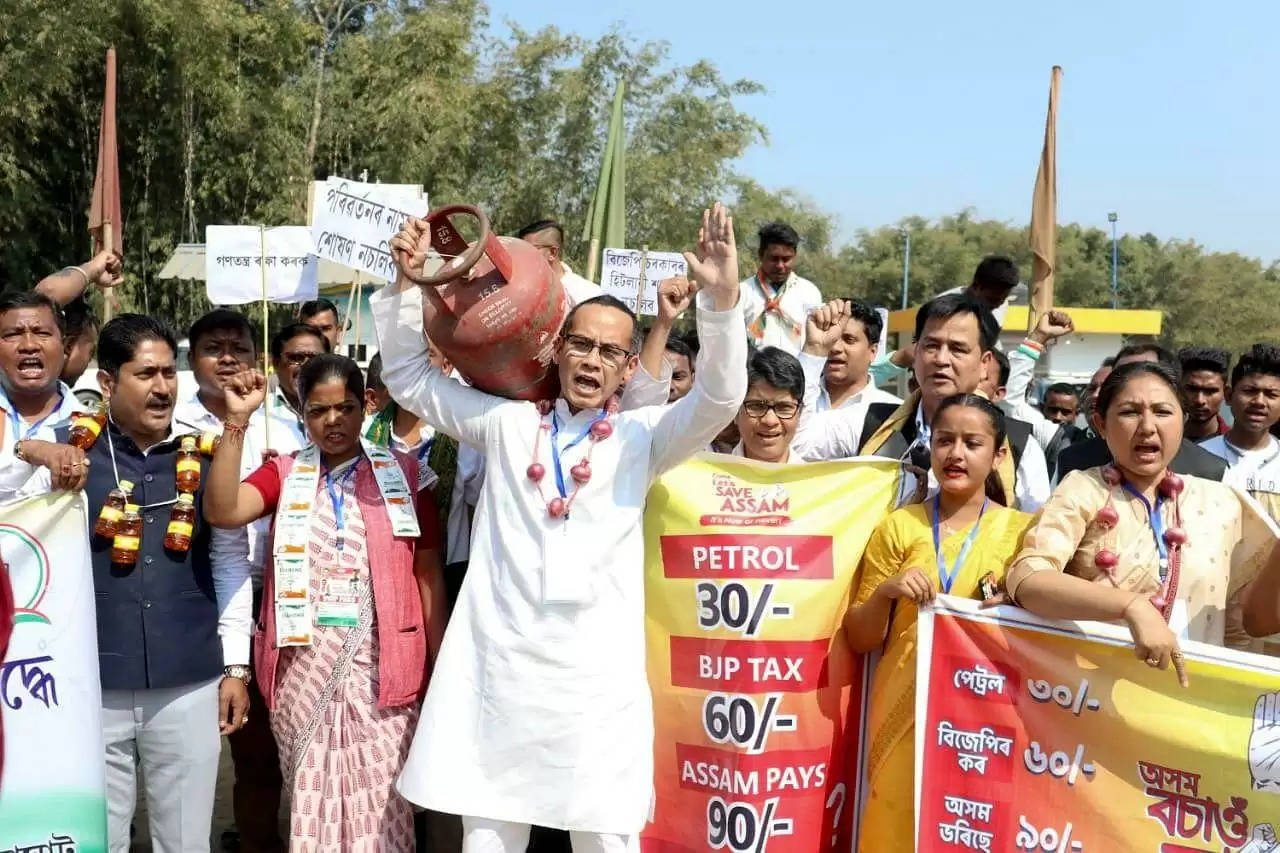 The Assam Pradesh Congress Committee (APCC) has launched a state-wide agitation over the rising fuel prices, besides accusing the government of failing to regulate the fuel rates and pushing the burden on the common man’s shoulders.

Senior leaders of the Opposition party led the protests across various districts of Assam on Sunday.

With barely a couple of months left for the Assembly elections in the state, the Opposition party is already in the midst of the 'Save Assam' campaign, going hammer and tongs at the ruling party over the contentious Citizenship Amendment Act (CAA), which the Bharatiya Janata Party (BJP) wants to implement in the country.

"The base price of petrol is Rs 33.46 per litre, and diesel is Rs 31.82 per litre. However, the common man is forced to pay Rs 87 per litre for petrol and Rs 82 per litre for diesel in Assam. The BJP is simply looting the people in the name of taxes," said APCC president Ripun Bora while addressing a rally in Hojai.

Bora further questioned the BJP government for not clarifying before the people about its price-control policies.

"Why not come out clean and let people know why are decisions being enforced on them?" he asked.

Taking pot-shots at the Sarbananda Sonowal government for increasing the prices of petrol and diesel in Assam disproportionately, chairman of the Congress campaign committee Pradyut Bordoloi questioned the basis of the move.

"I would simply like to ask the BJP government on what basis does it decide the petroleum prices every day? What is the explanation for subjecting people of Assam to this cruelty," Bordoloi asked.

"On behalf of the people of Assam, I want to ask why this hike in petrol and diesel prices when international crude oil prices are low," Gogoi said.

Taking a dig at the Prime Minister for recently stating that Assam benefitted from the double-engine BJP governments at the Centre and state, All India Mahila Congress President Sushmita Dev said, “The so called 'double engine' BJP governments are fooling the people of Assam.”

"Reducing Rs 5 on petrol-diesel just before elections in Assam is a hoax! The reality is that the Modi government at the Centre has increased tax to favour their corporate friends," Dev alleged.

The APCC further questioned the government on why consumers have not been provided with any relief in the wake of a steep hike in excise duty.