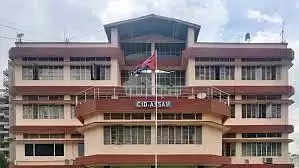 Krishna, who is the brother of the Chief Secretary, was recently transferred as the SP of the Foreigners Regional Registration Office (FRRO) at Barpeta.

He will be produced in a competent court on Friday.

The senior police officer, who is suspected to be in collusion with the group that masterminded the leak of police SI recruitment exam question paper, had appeared at Assam Police headquarters in Ulubari here after he had remained untraced since Tuesday.

He was arrested subsequently by the CID following his interrogation and taken to Mahendra Mohan Choudh (MMC) Hospital for medical examination and COVID test.

The state Home Department had earlier given its consent to the CID, Assam to initiate proceedings for the arrest of Krishna and additional SP, Karimganj, Prasanta Dutta for their involvement in the recruitment examination scam.

Both the police officials allegedly colluded with the prime accused in the scam, former DIG of Assam Police PK Dutta, suspended BJP leader Diban Deka and other accused.