Addressing the local people of Langpih, Sarma said that the governments of Assam and Meghalaya have been making concerted efforts during the last six months for a lasting and mutually acceptable solution to the longstanding inter-state border dispute. 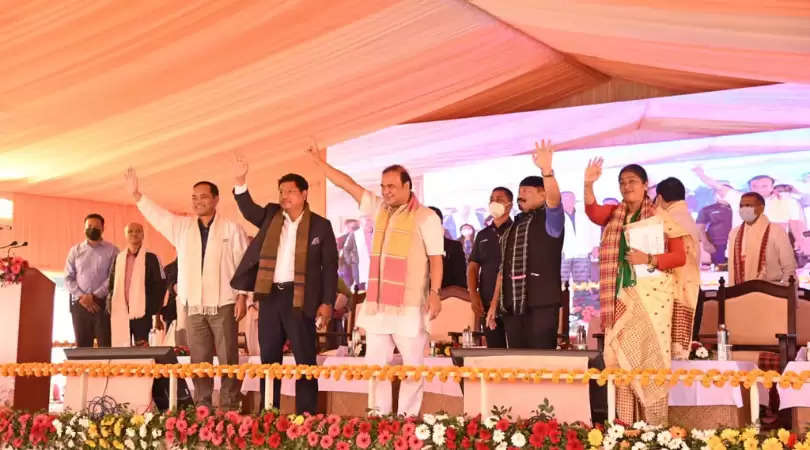 As part of confidence-building measure, and to bring a lasting solution to the decade-old inter-state border dispute between Assam and Meghalaya, Chief Minister of Assam Himanta Biswa Sarma along with his Meghalaya counterpart Conrad Sangma visited Lower Langpih under Kamrup district on November 16.

Both the chief ministers held a discussion at Langpih and also attended a programme organized by Kamrup district administration.

Addressing the local people of Langpih, Sarma said that the governments of Assam and Meghalaya have been making concerted efforts during the last six months for a lasting and mutually acceptable solution to the longstanding inter-state border dispute.

Sarma said that in the spirit of brotherhood and enduring friendship, both the governments would be able to resolve all issues between the two states.

Sarma said that after taking charge as the chief minister, he took the step to engage both the states to solve the border problem through concrete dialogue. He informed the gathering that he has already held discussions in the past on the matter with his Meghalaya counterpart.

Sarma pointed out that while there are 12 areas of dispute between Assam and Meghalaya, six places have been taken up in the first phase for resolution."

"Once the regional committees constituted for the purpose submit their reports, discussions would take place for resolution of the six disputed areas. He also assured the people that Langpih would be taken up in the second phase for discussion.

Sarma also mentioned that both the governments tentatively decided to implement central government schemes at Langpih with collective approach from the DCs of Kamrup and West Khasi Hills and in consultation with public representatives of both sides, so that people of Lumpi were not deprived from the fruits of development.

Meghalaya chief minister Conrad Sangma while speaking at the occasion appreciated the initiative taken by Assam chief minister for bringing an amicable solution to the inter-state border dispute.

Sangma said that the people in the disputed areas have immensely suffered during the last 50 years due to the longstanding border dispute, and it is precisely for this that the governments came forward to settle the issue through dialogue.

Sangma also lamented the fact that the earlier governments never committed to solving the border row.

While commissioner and secretary of border areas development department GD Tripathi delivered the welcome speech, the vote of thanks was offered by Meghalaya PHE Minister R L Tongkhar.