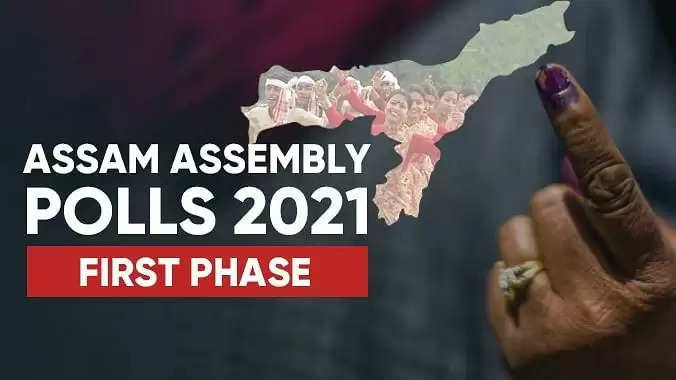 In Sivasagar district, 50.60 per cent was recorded in Amguri constituency, 51.25 per cent in Sibsagar and 52.50 per cent in Thowra.

The voter turnout till 11 am stands at 25.88 per cent as polling is underway across 47 assembly constituencies, according to the Election Commission of India (ECI). Sources said Sivasagar constituency recorded the highest voting percentage till now with a 28.38 per cent turnout.

Congress leader Gaurav Gogoi cast his vote at a polling booth in Jorhat.

It's a very emotional moment for me as it's the first time after many years that I'm coming to a polling station without my parents. Confident that people are going to vote out politics of lies & deceit & voting for politics that guarantees that their future is bright: ANI quoted Gaurav Gogoi.

"Voters are coming in large numbers to cast their votes. It's a good sign. We will definitely form the government," Sonowal said.

"Your vote is your right. As we step into the first phase of #AssamAssemblyPolls," Chief Minister Sarbananda Sonowal tweeted.

There are about 264 candidates, including 23 women, who are fighting for 47 seats. There are over 81 lakh voters, including 40.32 lakh women and about 124 Third Gender persons.

"The first phase of the Assam Assembly elections will be held today. We urge the voters to set a new record by participating in this celebration of democracy with the highest turnout. Special attention should be paid to the wearing of masks and maintaining social distance," BJP national president JP Nadda tweeted.

It may be reminded that the BJP and its allies had swept the election in Upper Assam in 2016. They had won 35 out of 47 seats in the last elections.

"The first phase of elections begin in Assam. Urging those eligible to vote in record numbers. I particularly call upon my young friends to vote," Prime Minister Narendra Modi tweeted on Assam polls.

First voter welcomed with a gamosa and a sapling at the model polling station in Batadraba constituency.

PwD (People with Disability) voter greeted with a gamosa at the Model Polling Station in Rupohi Nagaon election district.

"I cast my vote for the first time. It was a good experience and the polling officials helped me cast my vote," says a first-time voter Juri Buragohain.

Sonowal is eyeing for a second term.

It may be mentioned that the tea garden votes will be a major deciding factor in this election.

The first phase covers the entire Upper Assam and parts of Central Assam.

This will be the first assembly election in Assam after the death of Congress stalwart, Tarun Gogoi

Voters are seen queing outside the polling stations with strict adherence to COVID protocols.

With a majority of the constituencies falling under Upper Assam, political parties are focusing on the tea districts as the tea tribes will reportedly decide the fate of the elections in the state.

According to CEO Assam, 2,33,74,087 people are eligible to vote in the Assembly elections in Assam.