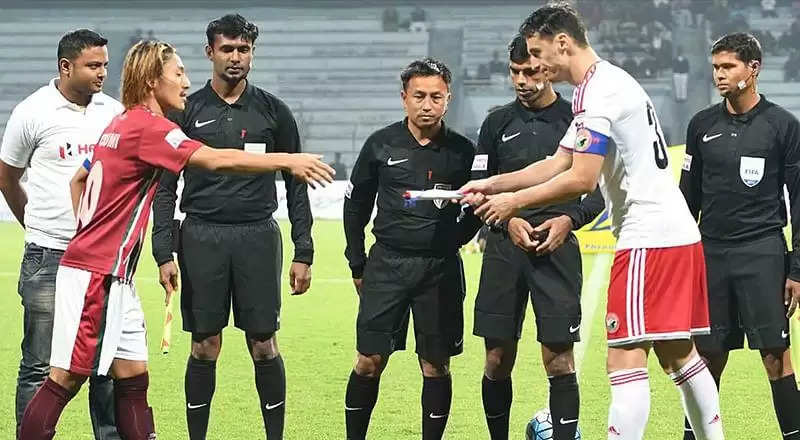 Both goals of the game came through spot-kicks as Aser Pierrick Dipanda Dicka first scored for the Mariners in the 12th minute. Skipper Samuel Lalmuanpuia, in the 72nd minute, ensured that the Meghalaya-based side returned home with a point at least.

Without the services of Sony Norde and Ansumana Kromah, who failed the fitness test and with Arijit Bagui and Yuta Kinowaki indisposed, Abhishek Das and Dipendu Dowary got their first starts of the season while Shilton D'Silva and Naro Hari Shrestha were ushered back into the starting eleven by Sanjoy Sen.

Bobby Nongbet, who came into the game under pressure after their 5-1 loss to Kingfisher East Bengal had one good piece of news as Aiman Al-Hagri was fit to play and replaced F. Lalrohlua in the centre of midfield as they retained their 4-2-3-1 formation.

The setback for the visitors came as early as in the eleventh minute of the game when Rakesh Pradhan was guilty of bringing down winger Shaikh Faiaz inside the box, resulting to a penalty in favour of the hosts.

Aser Pierrick Dipanda Dicka converted duly from the spot against his former side but chose not to celebrate and instead held aloft his teammate, Yuta Kinowaki's jersey in support of the midfielder who underwent surgery midweek; now ruled out of action for a couple of months.

Samuel Lalmuanpuia tested Shilton Paul's resolve twice in the first half but the Mohun Bagan keeper came out victorious on both occasions. Meanwhile, Dowary, making his Hero I-League debut had a brush with an open goal but missed the target around the half-hour mark.

Alen Deory's disappointing run of form continued as he was replaced by Samuel Kynshi after the half-time break. Lajong were dictating play in parts but were unable to find momentum in the final third.

The equalizer did arrive in the form of the second penalty of the game. Kinshuk Debnath was the culprit after he tripped Al-Hagri down and 19-year-old Samuel Lalmuanpuia obliged with a powerful spot-kick, which Shilton Paul failed to save, despite diving the right way.

That had clearly ruffled the feathers of the Green and Maroon as Kingsley Eze Obumneme out of frustration kicked Lalmuanpuia's groin and was given his marching orders after receiving his second yellow of the game.

Now down to ten men, the Mariners clearly lacked firepower upfront to make the difference as the tiring Dipanda alone could not get the winner as the game ended in a stalemate.

Sanjoy Sen's side plagued with injuries and now suspensions, play NEROCA on 19th December as they missed a glaring opportunity to go past Minerva Punjab FC at the top of the table. Lajong, on the other hand, stay in the third place and visit the home of the defending champions, Aizawl FC in the next round.