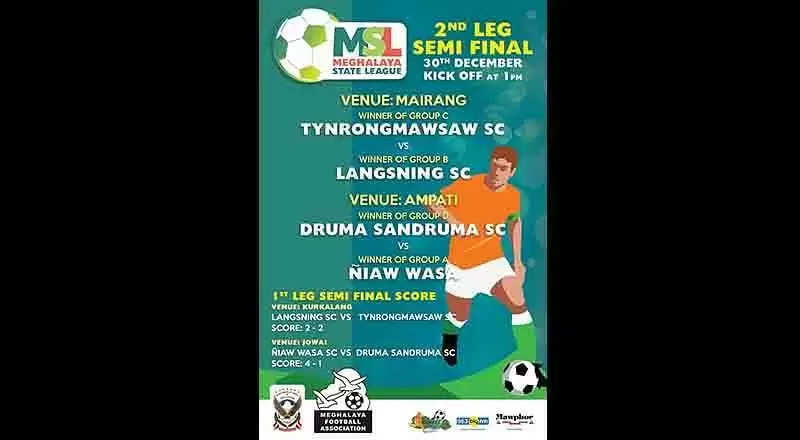 Shillong, Dec 29,2017: It is absolutely all to play for on Saturday in the second leg of the Meghalaya State League's semifinals, with each of the four teams still in the competition hoping to put their best foot forward.

The inaugural MSL tournament has seen 136 goals scored already, with nine of those coming in the first leg of the semifinals on Wednesday.

Those matches were a contrast but equally intriguing. In the Jowai game between Niaw Wasa and Druma Sandruma, the former won 4-1 at their home ground. That is a convincing margin on paper, but the Garo Hills-based side did pick up an away goal, which could prove valuable in the final reckoning between the two teams.

Meanwhile, the first leg clash between Tynrongmawsaw and Shillong giants Langsning ended 2-2 in Bhoirymbong, which is the home base for the latter in this tournament.

Two away goals are a precious commodity, so Tynrongmawsaw have a slight advantage when they face this year's Shillong Premier League champions on Saturday in Mairang, but Langsning will be gunning for victory and have a team that could do it if they click on the day.

Both matches will take place at 1:00pm.