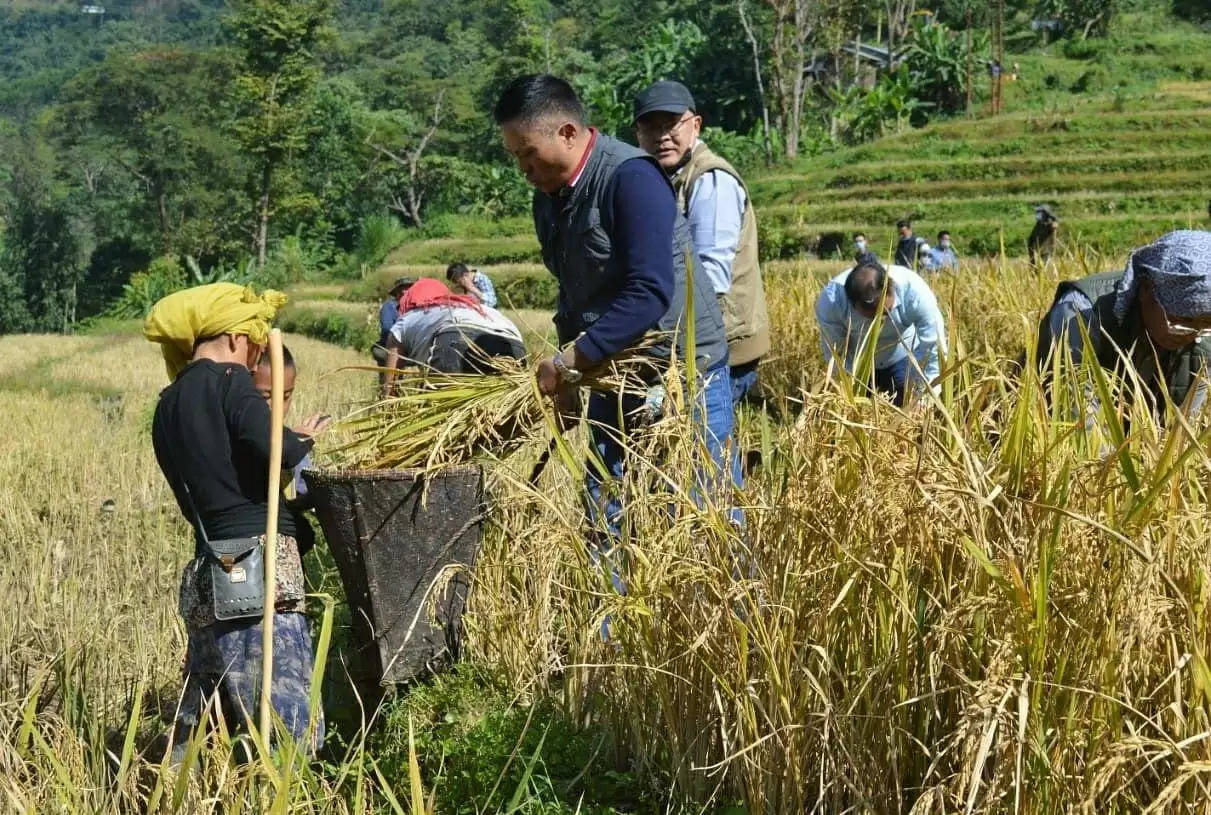 The Principal Secretary to the Chief Minister, K. D. Vizo, accompanied him along with Heads of Departments (HoDs), officers of the Directorate and District Offices from Agriculture, Horticulture, and other officials.

While interacting with residents of Botsa, including village elders, farmers and the officers accompanying him, he stated the purpose of the visit is to improve the existing traditional farming and to implement sustainable methods of farming.

“The traditional methods of jhum, terrace cultivation, which may not be economically viable nor ecologically sustainable, cannot be stopped, because it is being practised time immemorial,” he said.

We should undertake N-ISF in all workable areas so we can take up various activities under Agri and allied departments in a cluster approach to ensure productivity throughout the year.

“This would encourage educated unemployed youth and retired employees, to take up agricultural activities, to optimise land use for production sustainably in rural areas. They will further form into a Farmers Producer Organization (FPO) for the post-harvest value chain to the nearest market,” he added.

Thus, this N-ISF will turn into a business model and also give way for Agro-Eco Tourism.

Sema stressed that the N-ISF at Boke Botsa would serve as a model and will be replicated in all the districts, eventually.

With this system of farming, the state can achieve self-sufficiency and discourage import of rice, vegetables, fish and meat.

He also stated that there is no specific fund to start with and appealed to the community that they should not depend on the Government alone, but they should come forward and contribute their share for the success of the project.

He said that Global Positioning System (GPS) mapping of the area would be done by the geographic information system (GIS) Cell and that Agri & allied departments will have to prepare an action plan for early implementation of N-ISF starting from Boke Botsa.

He stressed on Departments working as “I” instead of “We” as “I” stands for “Illness” whereas “We” stands for “Wellness.”

The time has come for all departments to coordinate and work together.

Referring to the Bible, he said that there is a danger of famine coming upon the land and all Nagas must wake up before it is too late.

“God made their land fertile, and today it transformed Israel into a promised land,” he added.

On a more personal note, he stated that it was a blessing that his parents were farmers and so he is committed to bringing to fruition the dream of making Nagaland self-sufficient and self-sustainable in the Agri & Allied Sector.