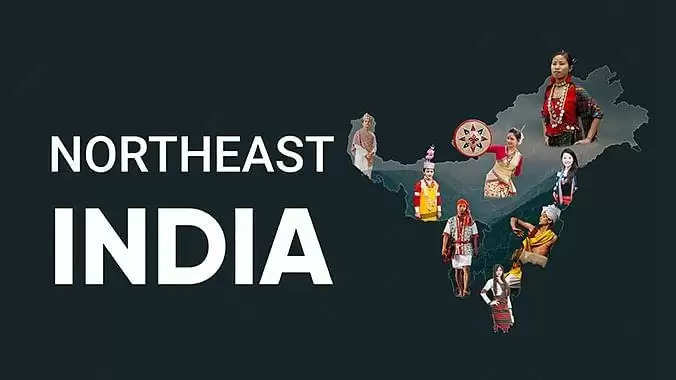 East India Company was lured to North East India by the natural resources and the geography— coal, tea, oil and access to Myanmar and even to Tibet.

The North-Eastern states of India account for approximately 8% of the country’s geographical area with just about four per cent of the national population. 70 per cent population in the Northeast lives in Brahmaputra Valley and the balance 30 per cent in the rest of the six states. If the economic disruption had not taken place, Northeast India would have been an economic powerhouse and hub for trade with ASEAN and five of its neighbours including, Myanmar, Bangladesh, Bhutan, Nepal and even Tibet Autonomous Region. It is a land bridge to ASEAN and fulcrum for Act East Policy of India.

Northeast India has suffered huge human cost and the impact of the violent conflict is seen even on institutions of governance, capital assets and widespread degradation and destruction of infrastructure. Continued violence for over six decades has reduced levels of human capital due to deaths, disease, depression, alcohol and drugs dependency, lost employment opportunities and livelihoods. The conflict in the Northeast is political in nature and cannot be resolved through “enemy centric approach” of elimination of insurgents by use of force.

The Government of India has created a ministry for the Northeast -- “The Ministry of Development of North Eastern Region” but the secretariat of this ministry continues to function from Delhi whereas it should be located at Guwahati (Assam) for better coordination with the local bodies and tribal organisations. In spite of the ministry being in existence for almost two decades, it has failed to bridge the perceptional and geographical gap with the people. Until or unless the secretariat start functioning from Guwahati, the problem and complexities of the region is difficult to fathom by policymakers sitting at Delhi. Northeast requires hybrid development strategy where development is subsumed in local tradition and customs. Parachuting policies and industrialisation from Delhi will destroy the indigenous cottage industries that are unique to the region.

People are connected to the land, forest and local traditions, thus the economic avenues should be found through these cultural roots of the people. Northeast like Sikkim can become a global hub of organic food, vegetables and fruits. There are about 1331 species of orchids, belonging to 186 genera reported from India; Northeast India sustains the highest number with about 856 species. Each of the states of the Northeast has unique species of orchids. Yet India imports exotic flowers including Orchids from Thailand and some European nations.

Similarly, Northeast has the potential to supply and export organic fruit and vegetables not only to the Southern and eastern states of India but also to Bangladesh, Myanmar, Bhutan and even Nepal. It can absorb the youth of Northeast in the agro, horticulture and supply chain management. What it requires is the creation of markets, supply chain and transportation system to transport the agro, floriculture and horticulture product to the end consumers. Even Jhumkheti can be converted into an alternative means of earning. Farmers can be provided with teak and saplings that farmers can plant along with the Jhumkheti. By the time they return to the same area for Jhumkheti after 10-15 years, teak/poplar trees would be ready for cutting. This can generate huge earnings for the villagers.

Professor Pranab Das in his report, “North–East - The Power House of India: Prospect and Problems” estimated that the North Eastern States including Sikkim has the potential of 84,000 MW of hydropower which is about 43 per cent of the total hydropower generation capacity in the country. The hydrocarbon reserves in Nagaland may increase India's on-shore oil and natural gas production potential by 75 per cent. Nagaland itself has 600 million tons of oil. Similarly, Meghalaya has close to 576 million tons of coal. The North-Eastern Region (NER) indeed is a resource bowl with reserves of uranium, coal, chromite, lignite, and potential deposits of Platinum Group of Elements (PGE), quartzite deposits, granite, limestone and renewable energy.

There is a need to understand conflict context concerning the Northeast. Most of the issues are related to socio, political and economic deprivation of the masses. Some Delhi-based analysts term conflict in the Northeast due to “fractured frontier”. But the reality is that when resources are meagre, the conflict for land, resources and subsistence will surface. The concept of development cannot be at the cost of tribal, social and cultural value systems. There is a need to incorporate tribal elders in the process of long and short term development objectives. Perception of a fractured frontier is a misplaced idea that needs to be removed from the perception of the policymakers.

Act fast but Remain Engaged: There is a need for the government to act fast since the current period is a transition phase and if this opportunity is allowed to pass, it will be difficult to reverse the clock. The Naga conflict needs early resolution. At the same time, the government needs to remain engaged with the people of other states and tribes so that they don’t feel left out or neglected. Engagement with the people is important to prevent reversal both in economic activities and security-related issues.

Northeast Need Capacity Building Rather than Money: Northeast does not want to be seen as an economic drain on the nation; it wants the government to enable people, societies and states. Giving freebies and doles is not the answer; rather it is paralysing and killing the potential of the region to be self-sufficient. The region has the potential to become an economic fulcrum for “Act East Policy of India”. The need of the hour is capacity building, management of complex socio-political environment and adoption of a people-centric approach. Northeast has the potential of producing approximately 84000 Megawatt electricity but it is power deficient and as a result, the benefits of information technology and industrialisation has not been reaped by the people. The power crisis of Northeast can be resolved by using untapped natural gas from Nagaland, Meghalaya and Manipur.

ALSO READ: Has India been a good neighbour?

Manage Risk and Minimise Social Harm: People are disillusioned because what has been promised has been delayed or not delivered. The basic amenities are lacking and there is corruption and lack of accountability. What people want is "stick to standards" even if the timelines are flexible. State and Central Governments must focus on social risk management, minimise social harm so that risk of future instability is reduced. The scarcity is artificial due to inaction of the government and selfish motives of the politicians resulted in a division of tribal affiliation. In a resource-scarce environment, what people say is “don’t snatch our resources to feed someone else”. Most tribal elders believe that “different origin has a different destiny” thus every project should be executed with shared benefits. The perception of mistrust is existing and tribals feel betrayed, promises broken and their due denied. Thus, the management of the social environment is vital to reduce the risk of instability.

Make Northeast International Trade Hub: In fragile markets, seeking opportunities abroad can often fill the vacuum in domestic economic activity. Northeast has the potential to be an international trade hub centre. In fact, India’s trade with Myanmar, Bhutan, Bangladesh and Nepal could be coordinated from Guwahati, Imphal, Shillong and Aizawl. The focus should be to export vegetables, fruits, flowers, food grains, medicines and even consumer goods from these dry docks. Such a move will generate jobs and constructive engagement of youths.

Let Northeast be Education and Sports Destination: Education and sports are one of the best ways to create ambassadors of India among the immediate neighbouring countries by opening up Northeast for education and sports to the students of Myanmar, Bangladesh, Bhutan, Thailand, Tibetans in exile and even Nepal. The government should develop a sports institute at Imphal where students of NER and regional countries can be educated. Similarly, medical, agriculture, horticulture and engineering institutes of excellence should be created for regional and international students at Guwahati, Shilong and Aizawl. This will help in the creation of goodwill ambassadors of India in these countries and will also create more competitiveness among the students from the region.

Create Northeast A Tourism Destination: Northeast India has vast potential of adventure tourism including river rafting, tracking, mountaineering, cave exploration and camping in the forests. Northeast is a paradise for nature lovers and botanical explorers. What is required is the development of infrastructure, skilled manpower as guides, tour conductors and a safe environment. Tourism industry itself can absorb a huge number of youths and can become a source of earning to the people and the state itself.

Northeast is the land of opportunity and it has the potential to be a pivot for the projection of soft power of India to the regional countries. There is huge natural and human resource that has remained untapped due to an insecure environment. We often forget that the problem in the Northeast is socio-political in nature and thus handling it through enemy-centric approach is an unwise strategy. Enable people and the region to convert “fractured frontier” into “prosperous frontiers”.

About the Writer: Brig Narender Kumar is an Infantry Officer. He has an extensive experience in counter insurgency and anti-terrorism operations. He has authored two books- “Challenges in the Indian Ocean Regions and Response Options.” and “Rise of China: A Military Challenge to India.” He has authored more than 200 research papers/ Chapter’s for various books/ articles journals and web portals. A former Distinguished Fellow at USI of India and currently Visiting Fellow CLAWS.