Catching up with Tarik from Shillong, Meghalaya 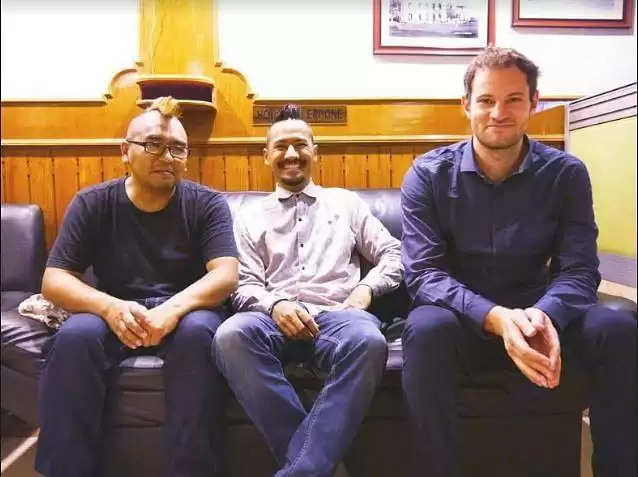 Tarik from Shillong, Meghalaya have been a force to be reckoned with in the Northeast India scenes for years now. By releasing several songs, playing tons of local shows across the region they have made quite a name for themselves. Successfully born from the two parent styles, punk rock and stringent nitty-gritty with a Khasi Twist, they have inherited the main characteristics of both, producing offspring that live in both worlds and neither, in a similar way to the aforementioned bands. Recently they succeeded to grab the runners up title at Rock Royalty.

The Northeast Today caught up with Guitarist Wanphrang K Diengdoh to know about the band more.

TNT: Hello guys, when and how did Tarik happen? What was the story behind the creation of your band?

The idea behind Tarik started to flesh out during dull Shillong evenings which were spent in tea shops. Valte and I studied in Anthony's college and played basketball (Yes we did!) because there was nothing much to do in Shillong. There still isn't much unless you have wads of cash to spend and a fancy car you can zip around town in. So yes, we spent countless evenings sipping sweet boiled tea and strumming a hollow guitar with a bunch of other guys. It was bizarre when I look back and the kind of songs we played. Of course they were all covers but there was a certain desire to escape the monotony of it all.

We never wrote anything then but I guess that was what has led us now to write songs that reflect a lot on everyday realities. It is therefore no surprise that our lyrics and music resonates and reflects the same sentiments of young, disenfranchised, marginalized sections of society all over the world. The lyrics are simple, catchy, sing-alongish yet musically crafted to the point of being deceptively simple so that the listener does not dwell too much on the form. People consider us a political band but we're not. We just address what we see around us. Sometimes it's funny, sometimes it's not, sometimes it is dangerous but we don't really align ourselves with any political ideology. Yes, we have our political positions and influences, but who doesn't?

TNT: How was your experience at Rock Royalty? Congrats for bagging the runner's up tile

It was nice. I think it was one of the larger stages that we've played. We could hear each other well. Got there well on time to do a proper sound check and assess the stage etc. Also, the sound guy, Bah Charles and Tony knew all of our songs so that always helps. The crowd sang along with us to most of our tracks and that is also a big confidence booster. Valte bagged best guitarist which was nice to have him recognised. He fondly chuckled at the end of the gig saying "No arpeggios were abused beyond 150 bpm". Yes,we were one of the more experienced bands but then again this platform has financially facilitated us to invest in our future musical pursuits. Also, I think it was befitting of the judges and organizers to let an upcoming band win first prize. It would definitely kick start their musical carrier.

TNT: How would you describe your sound? And what's the reason behind choosing this genre?

Ummm…our sound would be best described as "a heavy boozed up weekend with a syringe full of godly music played inside a local taxi that is stuck in traffic on its way to Police Bazaar as the passenger peers at the horizon at the hills hiding behind the concrete jungle that we still call Shillong". We call our genre 'Matrilineal punk' for the simple reason that a genre hungry music production system/industry would want to box everything neatly so that they can be sold easily. We didn't want that. Also because we spend hours in the studio nurturing our sound. So you'd walk in on a Tarik session in the studio and you'd find the most expensive guitar pedal on the planet routed to bizarre transistors and on cheap Indian speakers which would then create a strange yet fresh undiscovered sound (until someone makes a VST plugin of our samples) but yes at the end of the day, trial and error is always good. Valte aptly calls these situations 'Happy accidents', like the colour of his hair perhaps. Also, I think the fact that Valte approaches sound as an architect, means there is always an interesting acoustic or sound dimension to the composition. I think because he understands frequencies better, he also creates interesting sonic layers which otherwise seem impossible to create on the guitar. We lugged a plastic toy gun for the last gig and routed that to the pickups of the guitar. It did make strange sounds that reminded me of Shillong at night.

TNT: How hard were the 'struggle' days? Even thought of calling it a day?

We were very hard. We still are. It is hard. It will always be hard. But hard is good and hard should also be kind, compassionate, gentle, soothing, nurturing, loving, caring so that when it eventually comes out you should feel the joy and confusion like you've been hit by a bus on a blissful Monday afternoon…but always be hard.

TNT: How does Tarik compose its song? Tell us about the different influences that come into your mind while writing your songs. So how profoundly do you guys follow your jam session?

We'll thanks to digital technology, I can now afford to record all of the sessions on multitrack. (Before this, we ran the rehearsal session to a quarter inch tape, the final output thus premixed). Thankfully with the multirack, everytime I step out to take a walk, I listen to all the individual stems separately. I like it when a part speaks to me at a particular place that I am at. What I see at that point of time translates into some bizarre rough lyrics. I always write it down on my diary, never on my phone. I don't want to attribute too much meaning of this situation where the virtual meets the real blah de blah but the brain does work in very very strange ways which we can never comprehend. When I come back home, the sound becomes a motif and then we play that again in our next session, and I do the same the next time I take a walk. So yeah it's like a cycle. That and the fact that I do films full time, the music always needs to have a beginning, middle and an end but not necessarily in that order. For me, good music makes you see things in your head, just as a good film makes you feel things.

TNT: Through your songs what message you convey to the mass?

I think we would be giving ourselves too much credit if we were to assume that our music has or can facilitate change. We would have been banned by now! It would also be stupid for people to think that we can write solutions for the current crisis in India. It's really easy to do a "I sing for the NE track", get a fancy click bait worthy song title, throw in something exotic tribal imagery in the music video and then get an internet orgy of likes and shares to make yourself feel great as an artist. But I think it is crucial for us to acknowledge that there is a crisis in the world (there are no more countries, just criss cross economic situations that use ideas of nationalism to fortify these boundaries) and that no matter how many billboards and commercials and consumer based propaganda attempts to subdue this crisis, we will always put it across to the bourgeois or the burom class that their toxic liberalism, their high-handedness – be it at home, in the ophis sorkar, in religious institutes, only facilitate the further crippling of our society. So will there be singing in the dark times? Yes there will be and Tarik will provide the soundtrack.

TNT: A brief Insight into your future plans? What are the future perspectives of your band?

I am finishing a 92 minute documentary on the involvement of the Khasis, Jaintias and Garos in the First World War. I have also scored the music for the film. Valte and I are also building a state of the art audio-video studio. This is another extension of reddur productions- the production space that I run. Valte being a full time architect suggested the idea stating that even though Shillong enjoys its music, there is not a single sonic-architect in town who can specialize or facilitate the building of a studio that can nurture or generate a certain "Shillong sound". It is a far cry indeed from the nuanced Motown sound or the New York sound or the London sound but one also has to look at the others forces that control mainstream means of music and intervene. This venture of ours, is therefore our bit of cultural resistance. There are already some bands that show great potential and we are producing some of their content. More are keen to record their songs and videos and be part of this collective. Also I think you cannot create interesting genres or sounds if you are just another bastardised Bollywood studio or a South Delhi Brahmanical setup parading as something else supported by another corporate setup. The natives can speak for themselves- thank you!

We are also recording our second album as I speak and have zeroed down on a producer. It will not sound like the last for sure because the last thing we want is stagnation. Dr. Das from Asian Dub Foundation is also collaborating with us – "My latest sonic conspiracy will be with Tarik from Shillong. Using the classic trio format, Tarik present a different template, drawing on the spirit, humour and musicality of punk, rather than MOR rock or metal, as has become commonplace in the rest of india. This immediately denotes a willingness to challenge even their own audience. They ably write songs of current political relevance, drawing as well on their own language and regional culture, at a time in India when such sentiments in the arts are attacked both on the one hand by internet trolls, and on the other – physically – by right wing goons. The music has not been pre-ordained, but the resultant sound of this collective effort will in all likelihood be something you've not heard before"
Das has engaged in numerous collaborations with projects that are both politically and musically left field, including record label Indigenous Resistance. So yes we are really excited and look forward to playing more gigs around.

TNT: Besides the band, what do you guys do as an individual?

Valte is an architect, I do films and a I recently became a father.
We wish you lots of luck with your future projects

Cheers, thanks! Do check us out on facebook.com/tarikshillong Inbox us there if you'd like to purchase our first album: Khanatang Parking Lot bad ki Mawbynna Dewbilat