Northeast India and its Queer community- ‘Apart’ from the mundane yet very much ‘a part’ of it! 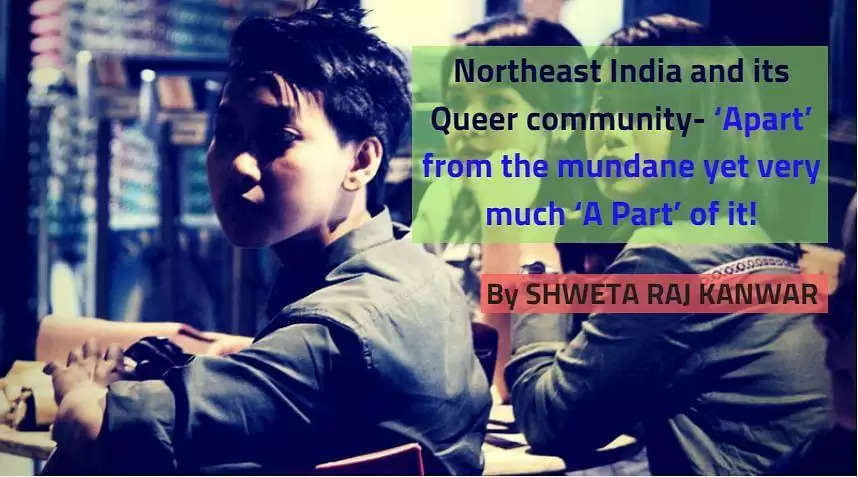 "When any part of humanity is sidelined, the rest of us cannot sit on the sidelines"- HILLARY CLINTON

For centuries altogether, the concept of a 'Third Gender' community has existed in the society, the presence of which has been seen to play a rather important role within the domains of an Indian societal norm and yet, this section faces the brunt for being what it wants to be. As time passed and evolution set in, the concept of 'Third Gender' became more and more complex with the presence of not only transgenders but the annihilation of Lesbian, Gay, Bisexual, Transgender, Queers, Intersex and Asexual- collectively known as the LGBTQIA community. This expansion however gradually led to the narrowing down of society's ability to accept them, thereby giving rise to phenomena such as Transphobia and an alienated attitude towards the members of LGBTQIA.

LGBTQ and Northeast India- Where lies the problem?

Northeast India is mainly presumed to be a region with a more encompassing attitude as compared to other parts of India. But a closer look shows a different picture. Transphobia as a phenomenon is widely prevalent in many people and likewise, a hostile attitude towards the LGBTQIA. Why this community has had to work hard to validate people for being who they are, is a question whose answer lies in the minds of the very people who seem to treat them differently.

"When I walk in the streets, people generally give me an eye first and then call me names like fa**ot, queer, gay and in Khasi they would call me 'Kynthei' (girl) implying traits of feminity and weakness. Hence it is difficult to travel from Point A to Point B without facing verbal slurs".

Jared identifies herself as a gender fluid person. After my interaction with her, I came to know that gender fluid is one who does not conform to the binary notion of gender.

It was not easy for her to come out openly to his parents about this and it took a lot of time and the acceptance set in but the ups and downs continue.

Speaking to TNT-The Northeast Today, Yougan Tamang, a Sikkim state Award Recipient and a journalist expresses his dissent over the fact that despite the existence of a transgender commission in Sikkim that provides free education to transgenders till the post graduation level, including availability of monthly stipends and scholarships, the LGBQ (lesbian, gay, bisexual and queer) still remain at large though the problems remain same.

"Identitiy crisis is a major problem among the members of this community", says Yougan. While on one hand, LGBTQIA constantly struggles to know and discover who they are; society's hostile attitude towards them, beginning from the family itself makes it worse.

Assam's Bidhan Baruah (who is now Swati), the first ever transgender judge of Lok Adalat recounts her childhood when she says, "My parents never took me as their own child. Rather, they termed me as a "Curse", sometimes defining me as "Hijra"- a term that is hard to explain and painful for me. But their love and affection towards my elder brother was just the opposite and this created a rift between me and my sibling".

A bright and meritorious student, Bidhan had to face the wrath of her family members due to her inclination towards becoming 'Swati' and not being 'Bidhan'. But despite all of the identity crisis, when just in class 7, she was inspired to take a step that made her the person who she is today. She recounts, "I remember, when I was in class 7, and reports of plastic & cosmetic surgery of Michael Jackson was doing the rounds. That was the day I came out openly before my friends who supported me a lot and took me to the nearest cyber café to gather information where I came to know about a Danish girl named Lily, on whom the first sex change surgery was successfully performed. These incidents took a huge turning point in my life and made me what I am today."

On March 31, 2012, Bidhan left Guwahati for Mumbai to undergo a sex change procedure- the first step towards becoming Swati and also the beginning of a struggle- a legal battle against her own parents at the Bombay High Court!

"My parents issued a legal notice against the SAIFEE Hospital Authority & Management due to which my surgery came to a temporary halt. I was asked to bring a court order following which I arranged my legal counsel to fight my legal battle and on May 7, 2012, the judgment passed by the Bombay HC became India's Landmark Judgment when they passed the verdict in my favour". That was Bidhan's moment of victory but the journey had just begun.

Karson (Name changed) from Shillong, Meghalaya is a confident person who is positive about himself and being a gay does not make him any different from others. He says, "Initially, I was not open to telling people that I was gay but gradually I started opening up to people I trusted and they supported and stood by me for who I was. Their support gave me the strength and I was lucky that whosoever I confided in were people who made me feel stronger and better."

However, Karson is not very open to confessing to his parents about his gender affinity as he fears that his mother would be sad after hearing the truth. He says, "I know my mother will not be very happy about it as every mother wants her son to be that sole bread winner just like other sons, hence for now, I would only like to keep it as it is".

Sapphira, also from Shillong identifies herself as bisexual and a non-binary person.

"Personally, I have not faced many stares and verbal slurs on a day-to-day basis because I feel it is more acceptable for a woman to be masculine than for a man to be feminine", she says.

Who does not know about Manipur's very own Bishesh Huirem– the Manipuri who represented India in Thailand at Miss International Queen 2016 and brought laurels to the country. She is also a celebrated theatre artist back in her home state. Like her name that signifies 'special', she lives by her father's teachings- "The more you work hard, the more you succeed".  Like other members of the transgender community, Bishesh also had to go through a crisis of non-acceptance by certain sections of the society, but with her hardwork and determination, she is now an established and an internationally renowned person.

Difference only in perception, not in gender or identity

It may be noted that Bidhan Baruah, Karson, Bishesh Huirem, Jared or Sapphira are no different from the rest of 'so-called' straight people. People's affinity towards gender is nothing but who they wish to be and ultimately, who they decide to become. In this regard, Karson puts across a question for the writer which also applies for everybody to introspect upon:

A deeper introspection into this and we know that we all became who we chose to be- our inclination towards becoming straight, lesbian, transgender, bisexual,  gay or even queer has actually nothing to do with whether we were born a male or a female. In the long run, it is just what identity we would like to embrace and, how we wish to live our lives under the influence of certain circumstances that varies from person to person. Hence, who we are we to judge what someone becomes or are?

The psychological trauma faced by members of LGBTQIA community often takes a great toll on them. However, Yougan from Sikkim says that the attitude of masses is gradually taking a positive turn.

"Many awareness programmes involving participation of gays and transgenders have been organised in Sikkim in the recent past and people have seemed to enjoy them greatly. This is a good sign", he says.

For protecting the interest and cause of transgenders, Assam's Bidhan Baruah established the All Assam Transgender Association on 25th December 2015. The Association was initially not given any registration by the state government due to the reason being that this would highly create imbalance to the dignity & morality of the society. But Bidhan did not lose hope and finally under Article 19(1) (c) part-III of the Constitution of India, the Association was materialised.

Manipur as a state also lies a step ahead than most states in India as people like Sandra Nandeibam became the only Trans model to make an appearance on the closing day of Garnier White Complete Fashion Weekend in Assam in 2016. Likewise, Loiloi Haorangbam, also from Manipur recently set an example for all when she bagged the first runner up crown in India's first ever national transgender beauty contest, Miss TransQueen India 2017.

In order to sensitise the masses as well as to create awareness about their rights, annual Pride Parades are held by members of the LGBTQIA community. In view of this, a Queer Pride event in Guwahati was organised for the first time by members and supporters of  local LGBT community in Guwahati on February 9, 2014. Soon after the Parade, some of the organisers got together and created XUKIA, a queer collective to take further the LGBT activism in the region which works for LGBT issues in the region. It is one of the first Queer Collectives to come up in Northeast India. After the Queer Pride Guwahati, 2014, Manipur also held a Pride Walk in Imphal. In 2015, individuals, groups and organisations from different parts of Northeast India decided to organise a collective pride walk and so the LGBT Northeast Pride Walk, 2015 was held on February 15, 2015 in Guwahati.

Under the leadership of Jared Massar, Meghalaya also witnessed its first ever Gay Pride Event in the year 2017.

"We have a facebook page dedicated to the LGBTQIA community where a lot of people express themselves and which also helps in creating solidarity among like-minded people in the virtual world but again we wanted to extend this solidarity to the real world. Hence we invited all of them to come for the pride meet event in 2017 and speak on their experiences and share their feelings. Since last year was the first of its kind event, it was pretty difficult convincing the queer community. Even this year it was not easy", Jared says.

It should be understood that gender is much nuanced. We must understand that gender and sexuality are two different things.

There is something called Drag Queen which implies a man who ostentatiously dresses up in women's clothes. Just because one dresses up like a guy or a girl does not mean he/she is sexually oriented to a particular gender. Hence, a person's sexuality is definitely not decided by his sex organs, in the literal sense of the term, like Sapphira says, 'If my brothers are straight and they do not have to come out, then why should I? We just have to more self-aware. The more self aware we are, our thought process also gets corrected automatically."

The winds of change are seen to be blowing in the right direction but an open mind is the only solution towards greater acceptance.  As Sandra Nandeibam rightly stated in her recent interview with TNT- The Northeast Today, "We are not an omen. We are the same as you are. We are all human beings. We are all equal. The only difference lies in the way we express our sexual orientations and gender identity. Each one of us has an inherent right to live with dignity, equality, and liberty. We are all mortal beings," Sandra adds. "One day we will all die and during this short period of life, why should we hate and mock others?  Love brings peace and virtue".