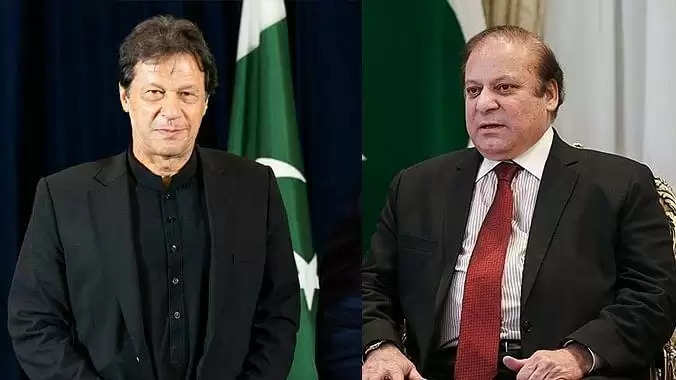 Sharif, the 70-year-old supreme leader of the Pakistan Muslim League-Nawaz (PML-N) who was ousted from power in 2017 for the first time directly named Army chief Gen Qamar Javed Bajwa and ISI head Lt Gen Faiz Hameed for interfering in the general elections of 2018 to ensure the victory of Khan.

Sharif made the comments virtually from London on October 16 during a joint rally organised by the Opposition parties under the banner of Pakistan Democratic Movement (PDM), formed to oust the Khan-led Pakistan Tehreek-e-Insaaf (PTI) government.

Nawaz has committed the highest treason by targeting military leadership which is tantamount to incite mutiny in the armed forces, Prime Minister Khan told GNN, a local news channel, in an interview on Thursday.

He also claimed that Sharif had got the support of the Army at the start of his political career.

How all of a sudden, Nawaz, who was brought into politics by military dictator General Ziaul Haq, became a champion of democracy?" Khan questioned.

The Army which has ruled Pakistan for more than half of its 70 plus years of existence, has hitherto wielded considerable power in the matters of security and foreign policy.

However, the Army has denied meddling in the country's politics. Khan also denies that the Army helped him win the election in 2018.

Sharif, currently out on bail, is facing multiple corruption charges.

The Islamabad High Court had allowed him to go to London for medical treatment in November last year for eight weeks. But he did not come back, while his lawyers told the court that he was still recovering.

Referring to PDM, Khan said the 11-party alliance was set up, to put pressure on his government to get relief in corruption cases against Opposition leaders.