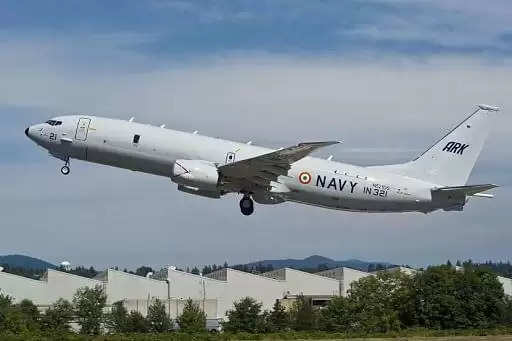 The Indian Navy on Wednesday received the first of the four Poseidon 8I maritime reconnaissance and anti-submarine warfare aircraft from the United States under a USD 1.1 billion deal, official sources said.

The aircraft, equipped with the latest sensors, landed at INS Hansa, a key naval base in Goa, on Wednesday morning, they said.

The Indian Navy already has a fleet of eight P-8I aircraft which are extensively deployed to keep track of the movement of Chinese ships and submarines in the Indian Ocean Region.

The P-8I, based on the Boeing next-generation 737 commercial aeroplane, is a variant of the P-8A Poseidon used by the US Navy.

India was Boeing’s first international customer for this aircraft. The first P-8I aircraft was inducted into the Indian Navy in 2013.

In 2016, the defence ministry had placed a follow-on order for four additional P-8I under the USD 1.1 billion deal.

Last year, the government cleared the procurement of another batch of six P-8Is.

The P-8Is were deployed to carry out surveillance on the movement of Chinese troops in eastern Ladakh in the last few months.

The reconnaissance aircraft was deployed in Doklam along the Sikkim border too, during the 73-day standoff between Indian and Chinese troops in 2017.

The P-8Is were also deployed to monitor the movement of Pakistani troops after the Pulwama terror attack last year. (PTI)