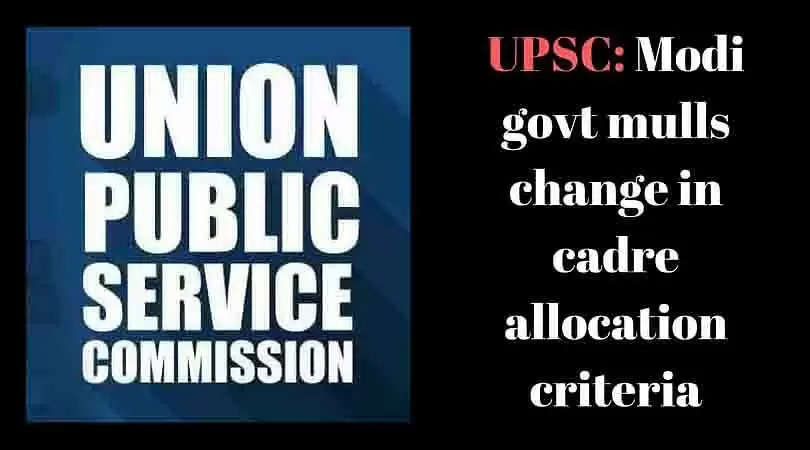 NEW DELHI, May 23, 2018: The government's proposal to change the rules for allocating services and cadres to candidates who have cleared the civil services exams conducted by the Union Public Services Commission (UPSC) has kicked up a controversy.

A letter dated May 17 by Vijoy Kumar Singh, Joint Secretary in the Department of Personnel and Training (DoPT), to various departments, said the PMO desired to consider the following suggestion and necessary action on it: "To examine if service allocation or cadre allocation to probationers selected on the basis of civil services examination be made after Foundation Course. Examine the feasibility of giving due weightage to the performance in the Foundation Course and making service allocation as well as cadre allocation based on the combines score."

On Tuesday, Congress president Rahul Gandhi took to Twitter accusing the government of tampering with the UPSC structure in order to appoint officers of the choice of RSS in Central services.

"Rise up students, your future is at risk! RSS wants what's rightfully yours. The letter below reveals the PM's plan to appoint officers of RSS's choice into the Central Services, by manipulating the merit list using subjective criteria, instead of exam rankings," he tweeted.

"Changes in allocation of services and cadres after the Foundation Course is a dangerous move by the PMO and must be nipped in the bud," Sinha said.

However, DoPT officials said this was only a "suggestion". "This is not an order. It is only at suggestion stage and the government will look into all the aspects before arriving to a conclusion," said an official.

The UPSC conducts the civil services exam in three stages— preliminary, main and interview—to select officers for various central services. After the results, the trainee officers have to go through a 15-week-long Foundation Course, which includes courses on public administration, law and political science.
It also comprises many extra-curricular activities, including visits to villages, trekking and interactions with fellow probationers etc.

At present, service allotment to the selected candidates is well before the commencement of the Foundation Course.

Some government officials are of the view that if implemented, the new norms may give more weightage to the performance of the probationers during the Foundation Course, thereby lowering the role of UPSC, which is currently the final authority in allocating the cadres to the trainee officers, based on their ranks.

"Favouritism can't be ruled out if the score of a trainee officer during the Foundation Course is considered for cadre allocation," said an official, requesting anonymity.