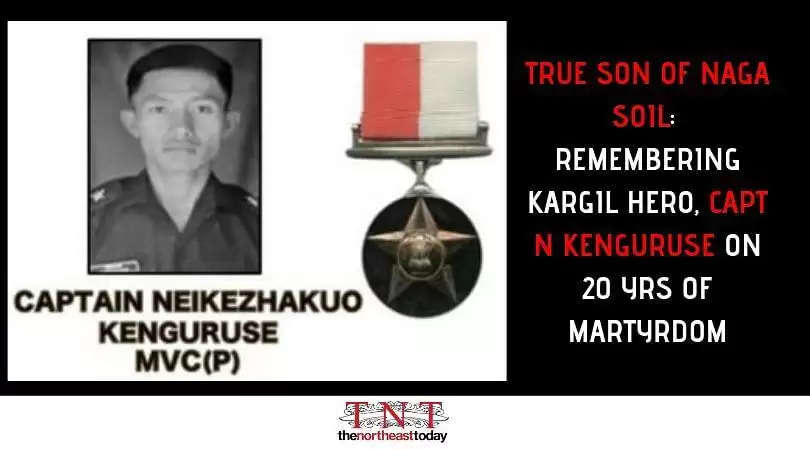 It  has been 20 years since Capt N Kenguruse of Nagaland made the supreme sacrifice and laid down his life on 28 June 1999 in Drass Sector during 'Operation Vijay' during the Kargil war. For his act of courage, valour and sacrifice, he was posthumously awarded Maha Vir Chakra.

He was born in Nerhema village in Kohima district of Nagaland. He did his schooling at St Xavier School in Jalukie and graduated from Kohima Science College. He was as a teacher at the Government High School in Kohima from 1994 to 1997. He later commissioned into the Indian Army on 12 December 1998.

He was fondly nicknamed Neibu by his family and friends. North Indian soldiers under his command called him Nimbu Sahib (Lemon Sir). A memorial was constructed at Pheza Village in his memory. The Army Service Corps in Bangalore has an entrance gate named in his honour.[

Captain Neikezhakuo Kenguruse was the Ghatak Platoon Commander during the attack on Area Black Rock in the Drass Sector on the fateful night of June 28, 1999 during Operation VIJAY.

He volunteered to undertake a daring commando mission of attacking a well-sited enemy machine gun position, on a cliff face, which was heavily interfering with all the approaches to the main objective of the Battalion. As the commando team scaled the cliff face, it came under intense mortar and automatic fire, which caused heavy casualties.

The oficer sustained splinter injury in his abdomen. Bleeding profusely yet undeterred, he urged his men to carry on with the assault. On reaching the final cliff face, the commando team was halted by a sheer rock wall that separated them from the enemy machine gun post. The officer took off his shoes to get a good grip and scaled the rock wall carrying with him a rocket launcher, which he fired at the enemy position.

Unmindful of his personal safety, the officer thereafter charged at the enemy position and personally killed two men with his rifle and another two with his commando knife in a hand to hand combat before succumbing to his injury.

By his dare devel act, Captain Neikezhakuo Kenguruse single handedly neutralised the enemy position, which had held up the Battalion's progress.

Captain Neikezhakuo Kenguruse displayed conspicuous gallantry indomitable resolve, grit and determination beyond the call of duty and made the supreme sacrifice in the face of the enemy, in true traditions of the Indian Army.