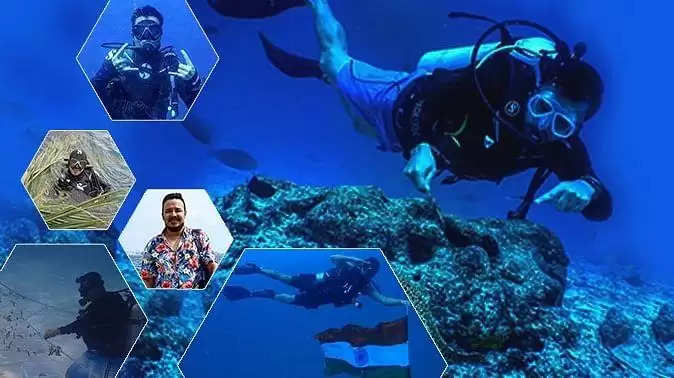 One year ago, a thought-provoking documentary video called “50 Minutes to Save the World”, a story highlighting the degradation of the coral reefs, was released on YouTube by Amir Zakeri, a popular Youtuber from America.

This documentary broke the heart of its viewers as they were introduced to the pathetic state of the coral reefs of the oceans. But thankfully, there are people who have been playing a part in the conservation of this vital component of the aquatic ecosystem.

One such individual is Sameer Chettri, a certified International diver from Shillong, currently based in Males, Maldives, who has been tirelessly working towards the restoration of the coral reefs to allow the natural inhabitants a chance to thrive.

In an exclusive interview with TNT - The Northeast Today, Sameer spoke about his journey from working in Mc Donald’s to becoming a diver and a coral reef restorer.

Sameer completed his Aircraft Maintenance Engineering from Hindustan Aerospace and Engineering, Pune in 2008 and after this, he joined Bangalore flying club as a junior aircraft technician.

He also got involved with Microlight aircraft (Zenair 701) Agni aerospace around the same time.

The doorway to adventure sports opened up when he got an opportunity to work with India’s first and only skydiving company “Skyriders” in Mysore as operations manager. But due to recession, his passion came to a halt and he was unemployed for almost 2 years. So, in the meantime, because of his love for human interactions, he began working in Mc Donald’s and also joined restaurants as service staff. But during night hours, he would send out his CV to several outdoor sports companies and wait for their call.

One fine day he received a call from Temple adventures, Pondicherry for a personal interview and with less than ₹1000 in his pocket, he grabbed his backpack and left the very next day. Because of his technical background, he was offered a job as an equipment technician and safety personnel. The company also provided him with further training as a diver.

After gaining experience as an advanced diver he got involved in marine conservation, building artificial reefs in the east coast of India along with Temple adventures team.

After leaving Pondicherry, he went to Goa and Andamans for some time to learn and there he specialised in scuba equipment and breathing air systems. It was then that he got the opportunity to work in the Maldives with Coltri compressors as an Engineer and also got an international license as a certified dive industry technician from Thailand under Association of Scuba Service and Technicians.

When asked about what drove him towards this sport, he said, “It has always been Mother Nature and my passion towards preserving her beauty that got me into diving”.

He considers his parents to be the biggest inspiration in his life who believed in him in times when he was in self-doubt.

“In order to become a professional diver, all one needs is passion, good health, swimming skills, determination and vision,” said Sameer.

Sameer has so far explored Bay of Bengal, Arabian Sea, Laccadive Sea, Indian Ocean, Gulf of Thailand and river Umngot in Dawki, Meghalaya. He has had many interesting marine life encounters in his “Diving” career such as Hammerhead shark, Tiger shark and whale shark.

Sameer is currently working with Euro divers Maldives as a base Engineer for diving equipment, breathing air compressor systems along with water sports motorised and non-motorised equipment.

According to Sameer, these marine conservation projects aim to assist nature to gain its balance inch by inch and he is hopeful to make this world a better place not just for a particular species but, the entire ecosystem.

He considers Scuba diving next to spacewalk. He said, “Irony is that we know more about the Moon and Mars than our own Seas and Oceans which plays a very vital role in this planet”.