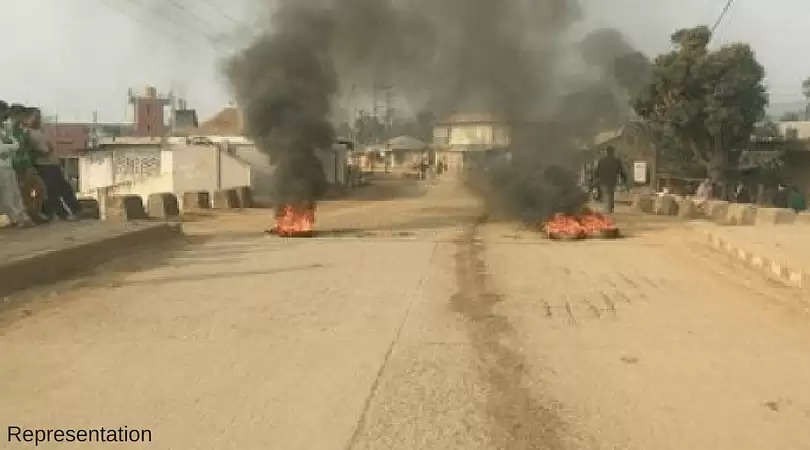 GUWAHATI, July 21, 2018: A 24-hour statewide bandh by All Koch Rajbongshi Students' Union (AKRSU) observed from 5am in support of their demands for a separate Kamtapur state and Scheduled Tribe status for the community while the All India Motor Transport Congress started an indefinite chakka bandh from 6am, demanding an increase in fares of passenger vehicles.

A motorcycle was set on fire by the AKRSU bandh supporters and had also burnt tyres on roads at Kadamtali in Chirang district and roughed up drivers and conductors of commercial vehicles at Ananda Bazar in Baksa district.

Hundreds of passenger and goods-carrying vehicles got stranded at Srirampur in Kokrajhar district. Life was completely paralysed at places like Tamulpur, Goreswar and Salbari in Baksa district.

Police detained two bandh supporters in Dhubri, two in Dhemaji and one in Chirang.

The AKRSU bandh came on a day the Centre held tripartite talks in New Delhi with leaders of the state's six communities which have been demanding ST status. The student union, which has long been spearheading the demand on behalf of Koch Rajbongshis, skipped the meeting, arguing that they will not discuss the Kamtapur and ST issues separately. Three other organisations representing the Koch Rajbongshi community participated in the meet.

AKRSU general secretary Gokul Barman said, "When we had participated in a meeting with the Centre on April 24, 2017, we told them we will never discuss the ST status and Kamtapur issues separately. We had demanded that the Centre hold a meeting with us within three months but in vain". He also added that the proposed Kamtapur includes 15 districts from Assam and six from Bengal.

Barman said they had also sought a meeting with chief minister Sarbananda Sonowal a month ago but were yet to get an appointment.

He accused the Centre of playing the divisive game with the Koch Rajbongshis by also inviting other organisations of the community for Friday's tripartite talks in Delhi.

The Soy Jonogostiyo Oikya Manch, a forum of the state's six communities demanding ST status, will decide in its executive meeting at Golaghat on July 25 which Koch Rajbongshi organisation will be in the forum, All Moran Students' Union president Arunjyoti Moran said.

The forum has one organisation from each of the six communities with AKRSU representing Koch Rajbongshis so far.