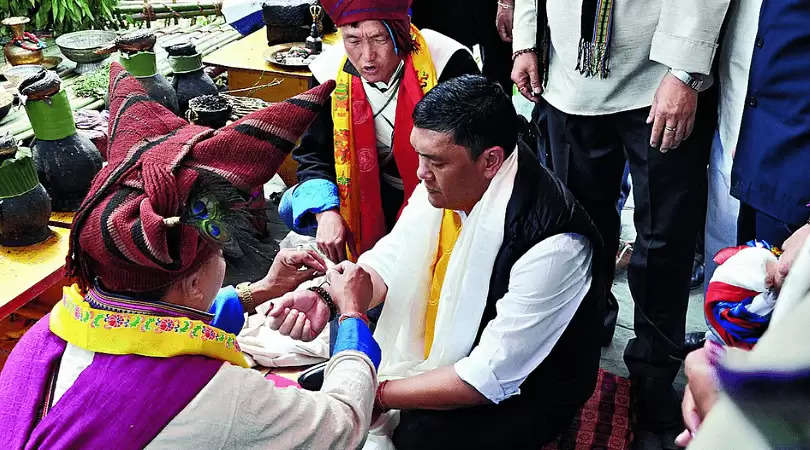 On Friday, the chief minister of Arunachal Pradesh Pema Khandu reiterated the need to know the ethos of one's culture and tradition and called for learning, speaking and promoting one's dialect to prevent cultural erosion.

Khandu graced the second edition of Tang festival of the Sartangs Tribe at Salari under West Kameng district.

However, he expressed dismay over poor performance by some districts and warned that the government was taking a serious note of the issue.

Khandu assures locals that their proposals to take up Khoitam and Gangri hydro projects, as it would change the economic condition of the people of the area, would be taken up in earnest.

He said Team Arunachal has been doing a wonderful job in transforming the lives of the people of the state.

Transport and road communication is being given utmost priority as it paves the way for development.

Likewise, digital connectivity, air connectivity, and the East-West corridor would give a new dimension and fillip to the economic affairs of the state. He said the Bogibeel Bridge, when completed, would benefit eight districts of eastern Arunachal.

Addressing the issue of 9-mile to Nafra road, he urged the locals to prioritise road communication over personal gains and suggested that a middle path could be worked out so that the road for which a grant of Rs 75 crore has been allocated in the 1st phase sees the light of the day and also the affected do not feel the pinch by way of petty contracts or availing the direct benefit transfer under the Pradhan Mantri Awaas Yojana.

He assured the people on the construction of a playground under Khelo India and said the Schedule Tribe issue of the Sartang community was being favorably handled by the ministry of tribal affairs.

Khandu said that the demand for creation of two circle offices in Sartang would be forwarded by him to the chief secretary for a feasibility report.