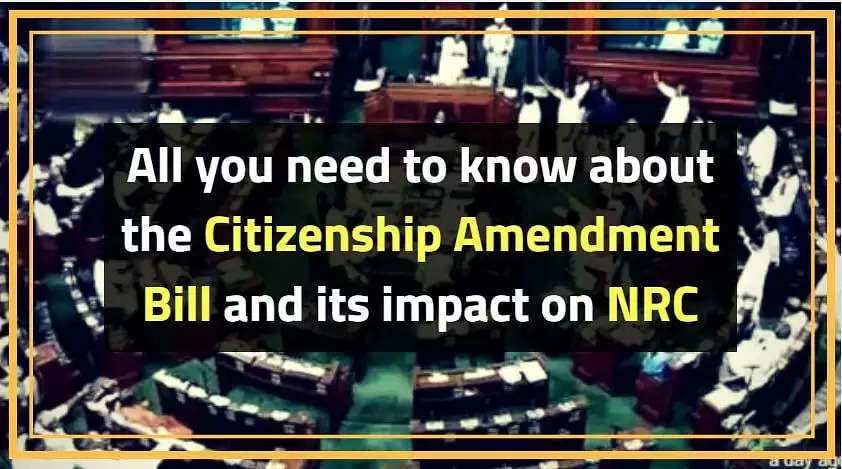 The Lok Sabha on January 8 passed the Citizenship (Amendment) Bill even as the entire Northeast India observed a Northeast Bandh in order to show dissent over the passing of the Bill.

In recent weeks many states of Northeast India has seen many protests over the proposed Citizenship (Amendment) Bill, 2016.

WHAT DOES THE CITIZENSHIP AMENDMENT BILL 2016 AIM FOR?

The Bill seeks to amend the Citizenship Act, 1955 to make illegal migrants who are Hindus, Sikhs, Buddhists, Jains, Parsis and Christians from Afghanistan, Bangladesh and Pakistan, eligible for citizenship. The Citizenship Amendment Bill was proposed in Lok Sabha on July 19, 2018, amending the Citizenship Act of 1955.

However, the Act doesn't have a provision for Muslim sects like Shias and Ahmediyas who also face persecution in Pakistan.

The Bill also seeks to reduce the requirement of 11 years of continuous stay in the country to six years to obtain citizenship by naturalisation.

The registration of Overseas Citizen of India (OCI) cardholders may get cancelled if they violate any law.

Under Article 9 of the Indian Constitution, a person who voluntarily acquires citizenship of any other country is no longer an Indian citizen

Citizenship by descent: Persons born outside India on or after January 26, 1950, but before December 10, 1992, are citizens of India by descent if their father was a citizen of India at the time of their birth

From December 3, 2004, onwards, persons born outside of India shall not be considered citizens of India unless their birth is registered at an Indian consulate within one year of the date of birth

WHEN DID THIS IDEA CONCEPTUALISE?

The Government at the Centre had promised to grant citizenship to Hindus persecuted in the neighbouring countries during the 2014 General Election. In the party's election manifesto, the BJP had promised to welcome Hindu refugees and give shelter to them.

WHO IS AN ILLEGAL IMMIGRANT?

According to the Citizenship Act (1955), an illegal immigrant is defined as a person who enters India without a valid passport or stays in the country after the expiry of the visa permit. Also, the immigrant who uses false documents for the immigration process.

HOW WILL THE CITIZENSHIP AMENDMENT BILL AFFECT THE UPDATED NRC LIST?

While the Bill is designed to grant citizenship to non-Muslim refugees persecuted in neighbouring countries, NRC does not distinguish migrants on the basis of religion. It will consider deporting anyone who has entered the State illegally post-March 24, 1971, irrespective of their religion. Currently there are six detention camps for illegal migrants in Assam but it's still not clear how long the people will be detained in these camps.

WHAT IS NATIONAL REGISTER OF CITIZENS (NRC)?

The National Register of Citizens (NRC) is meant to identify a bona fide citizen. In other words, by the order of the Supreme Court of India, NRC is being currently updated in Assam to detect Bangladeshi nationals who might have entered the State illegally after the midnight of March 24, 1971. The date was decided in the 1985 Assam Accord, which was signed between the then Prime Minister Rajiv Gandhi and the AASU. The NRC was first published after the 1951 Census in the independent India when parts of Assam went to the East Pakistan, now Bangladesh.

The draft NRC was again published on July 30, 2018 and included the names of 2.9 crore people out of the total applications of 3.29 crore. There has been a huge controversy over exclusion of 40 lakh people from the draft NRC. Following a directive of the Supreme Court, the process of filing claims and objections to the draft NRC began on September 25 and it came to an end on December 31 last year.