A delicacy called ‘Smoked Meat’ in Northeast India- Can it lead to Cancer! 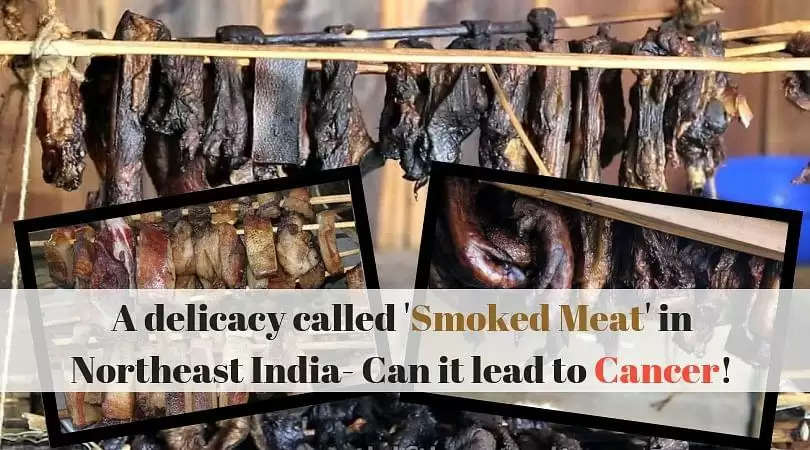 Northeast India is renowned, among other things, for its exquisite cuisine, of which smoked meat occupies an important place. From Nagaland's Smoked Pork to the Garos' smoked meaty delights in Meghalaya, this dish is as addictive as it sounds. It is very interesting to note that excess meat is processed and preserved by drying or by drying cum smoking or by salting and drying with local herbs or by fermentation. Many people in this part of the region claim that certain herbal products used in meat preservation and processing has lypolytic, proteolytic, cholesterolytic and hepatoprotective properties. Their claim is probably true from the fact that in spite of heavy consumption of meat, few people are prone to heart problems.

However, there is also a darker side to Smoked Meat. As much as meat lovers indulge in these so called "burnt food" and go raving about it, health experts have a different point of view.

When food gets cooked, there are many chemical reactions that are involved in it. While some of these reactions make food sinful and irresistible, there are also a few reactions that could prove to be harmful for our health if safety standards are not met. Recent studies on smoked or barbecued foods have indicated that they contain chemical contaminants that are harmful for our health, and capable of causing dangerous diseases like cancer and heart ailments in the long run. This is because the cooking process involves burning of fuel, which gives rise to many chemical contaminants that are carcinogenic. A recent campaign launched by Food Standards Agency of UK also warned consumers about the cancer risks of eating overdone fries or even a burnt toast!

Following suit, the Food Safety Standards Authority of India (FSSAI) under Union Health Ministry plans on taking necessary measures to ensure that the right code of practice is followed across India. Their inspectors will be investigating in respective states to check on the issue.

According to an advisory by FSSAI, it states, "Many chemical contaminants are formed during the combustion of fuel both in the smoking and direct drying process. Examples include polycyclic aromatic hydrocarbons (PAH), dioxins, formaldehyde, nitrogen and sulphur oxides (relevant for formation of nitrosamines etc.). Furthermore, heavy metals are also found in combustion gases. The types and amount of contaminants depend on the fuel used, the temperature and other parameters."

When we checked with Dr. Saurabh Arora, Founder of www.foodsafetyhelpline.com and Managing Director of Auriga Research Pvt. Ltd, he said, "Smoked meat has been produced and used for centuries around the world and is safe to consume if produced using the proper procedures. If proper procedure is not followed and proper quality of fuel is not used it can lead to the formation of toxic chemicals like PAH, PCB (poly chlorinate biphenyls), dioxins etc. All these are known carcinogens and prolonged exposure can cause cancer of stomach, skin, lungs and others."

According to Ashwin Bhadri, CEO of Equinox Labs, PAHs are extremely harmful for human health. "They are a group of chemicals that are formed due to incomplete burning of coal, oil, gas, wood, garbage, as well as other organic substances, such as tobacco and charbroiled meat. As per research, there are more than 100 different PAHs which are identified. Many PAHs have caused tumors in laboratory animals when they inhaled, consumed or were exposed to these chemicals for a long period of time."

He went on to add, "Cooking meat or other food at high temperatures, which occurs during grilling or charring, raises the levels of PAHs in food."

Dr. Arora explained further, "For example, a tandoor is traditionally used to cook meats on coal or wood flame which is perfectly fine and gives them a wonderful smoky flavour, but if kerosene or petrol or plastic bags are used to light the fire it will not only give a bad taste, it will also lead to the production of all these toxins. Also if the fire is too hot and in the process the meat is burnt, it will again contain these toxins."

So, you don't really have to frown, but keep an eye out. Not all smoked food is bad for you. It is the process of cooking that you need to pay attention to. Go to trusted sources while buying smoked products. That could be a good start.