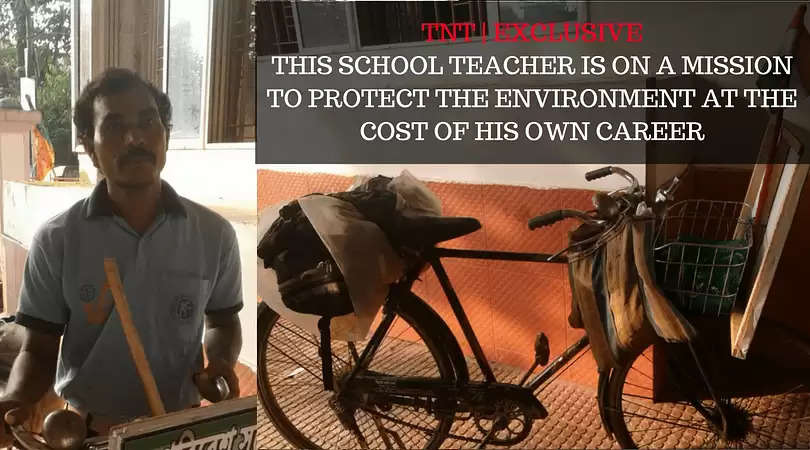 Rejecting the concept of spreading bookish knowledge, a West Bengal-based school teacher chose cycling expedition across the country and beyond — Bangladesh to create awareness about environment protection and that too, compromising his salary for most of the months a year.

Ramprasad Naskar has toured various states in India. He set out his journey from Bengal on October 3 this year to travel to Bangladesh's Sylhet and then Assam's Karimganj to enter Tripura's Kumarghat and then to Agartala on October 23. He had then visited Comilla, Cox Bazar, Borishal and Patharghata in Bangladesh before reaching his home.

Detailing his unique mission, Ramprasad said that his cycling journey started in 2010 to spread awareness of maintaining hygiene, cleanliness and sanitation first with West Bengal so that the next generation could breathe in pure air.

Native of Sonarpur, Ramprasad did simple BSc with Geography subject and later completed his B.Ed to get a contractual job in Sarva Siksha Abhiyan (SSA) in 2006. Despite getting a job, he could not restrain himself from paddling to save the environment and not even after exchanging his wedding vows last year.

"Necessity of protecting environment came to my mind while studying Geography during my college days. One of the finest reasons for environment pollution is due to increasing number of vehicles that emit smoke. But bicycle is the best affordable as well as pollution-free medium to make people understand the importance of a cleaner country and also promote cycling ," 40-year-old Ramprasad told this scribe.

He preferred riding his own bicycle to work rather than taking a smoke-emitting vehicle that adds to air pollution. Generally, he paddles 130-140 kilometres a day.

"Initially, I started cycling in 2010 covering different parts of West Bengal for 23 days to spread the message of protecting our environment from getting polluted. Then I thought of travelling to other states and accordingly, I have been paddling since. On December 18, 2013, I covered Jharkhand, Orissa, Chhatisgarh, Maharashtra, Andhra Pradesh, Karnataka, Kerala, Tamil Nadu, Goa, Gujarat, Madhya Pradesh, Haryana, Punjab, Jammu & Kashmir, Himachal Pradesh, Pondicherry, Uttarakhand, Uttar Pradesh and Bihar including the eight northeastern states. The journey ended on June 7 in 2014 though I returned home after four days," Ramprasad said.

This was his second visit to Tripura.

After a gap of six months in 2014, he again started his 22-day expedition within West Bengal. He continued his awareness campaign on personal expenditure last year and first month of the current year in his native state.

Ramprasad also expressed his grateful to his parents and newly-wed bride for their consistent support even knowing that his cycle-tour would make them adjust with minimum finance for their livelihood. Mere Rs. 8,000 is not enough to run a family of four, the Naskar family often meets their expenses with half of the amount.

"I don't get my full salary for most of the months since I take CL from the school for my cycle expedition. I could recall three years back, I didn't get salary for four months. But my family didn't starve as we received financial assistance from neighbours and some of the neighbouring states where I have toured. My family and I believe that not money, but adjustment with situation is the main thing," he said.

Before joining as a teacher at Sripur Siksha Sadan High School, Ramprasad experienced his hand in driving, farming (he still farm his own land) and tutoring children.

Sharing his journey, during his tour, he carries along with him a bag full of clothes, dry fruits, biscuits and there were days when he would fill his appetite with these foodstuffs. He slept in school verandahs, shops, roads.

"I even slept under a bridge at night. Interestingly, during my recent tour, there was a night where I had taken shelter inside a police station in Bangladesh before coming to Tripura. I share my stories to my students and I feel proud that they show their desire to follow my path," he said.

(The writer is a Tripura correspondent for TNT – The Northeast Today and she can be reached at priyankadb27@gmail.com)