Tripura: Reports of clashes between Congress and BJP activists ahead of Panchayat by-elections 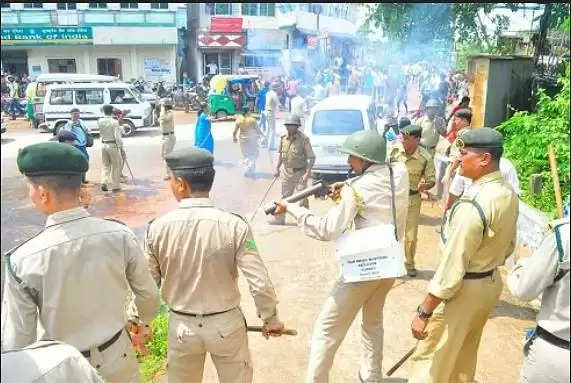 On being informed, the S.D.P.O. immediately called the additional force to tackle the intense situation. Police officials also resorted to 'lathi charge' to dispense the gathered activists in which few BJP activists were also injured.

BJP State Vice-President and local MLA Ram Prasad Paul also immediately rushed to the spot but was seen accusing the S.D.P.O. for the 'lathi charge' by the police and T.S.R.

he by-elections to a record number of 3,386 vacant seats of gram panchayats (3,207 seats), panchayat samitis (161) and zila parishads (18) were necessitated by large-scale resignations of elected representatives of Left Parties and death of some representatives.

Last week, Law and Education Minister Ratan Lal Nath, also the Chairman of BJP's panchayat election committee, announced that they would field candidates for all the 3,386 vacant seats.

The IPFT leaders did not support the announcement.

Meanwhile, life was paralysed on Tuesday over the IPFT-sponsored 48-hour shutdown at Killa tribal areas.

The IPFT called the two-day strike demanding nomination of their party leader as Chairman of the Killa Block Advisory Committee (BAC).