Tripura | Over 400 Bharat Bandh supporters detained in the state 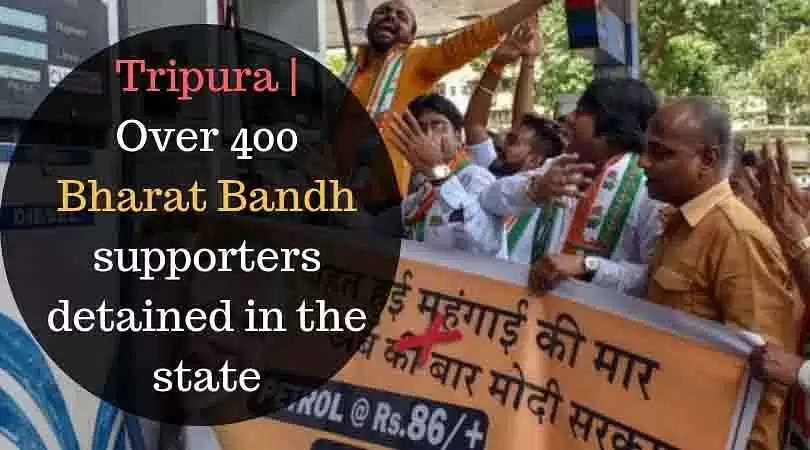 AGARTALA, September 11, 2018: Around 400 bandh supporters were detained in different parts of Tripura on Monday for trying to disrupt normal life, a senior police officer said.

The bandh call by opposition Congress and Left parties over spiralling fuel prices and rupee depreciation, however, failed to evoke much response in the BJP-ruled state, he said.

All government offices, including the civil secretariat, conducted business as usual and public vehicles plied on roads like any other day, Officiating AIG (Law and Order) Subrata Chakraborty said.

"The strike was totally violence-free and no untoward incident was reported from any part of the state so far. More than 400 picketers were detained for trying to enforce bandh," he told PTI.

Some business establishments chose to remain shut in the state capital and neighbourhood areas, but normal life wasn't affected in any way due to the bandh, he added.

The Department of General Administration had issued a memo instructing employees to report in office by noon.

A source at the administration department said the officials have complied with the instructions.

Pradesh Congress president Birajit Sinha, on his part, asserted that people have "spontaneously" supported the bandh.

"The information gathered from different districts suggest that people have supported the agitation. Our supporters courted arrest at Dharmanagar in North Tripura, Camperbazaar and other parts of West Tripura. The ruling BJP administration had threatened them with consequences, but they did not budge," Sinha said.

CPI (M) state secretary Bijan Dhar said his party and three other Left Front allies – CPI, Forward Block, and RSP- had called the strike to protest against the alleged misrule of BJP-led NDA government at the Centre.

"Common people are going through a hard time due to devolution of rupee, rising fuel prices, inflation, attacks on Dalits and minorities among other issues. We had given the strike call to protest against these atrocities. The bandh was successful in Tripura," Dhar claimed.