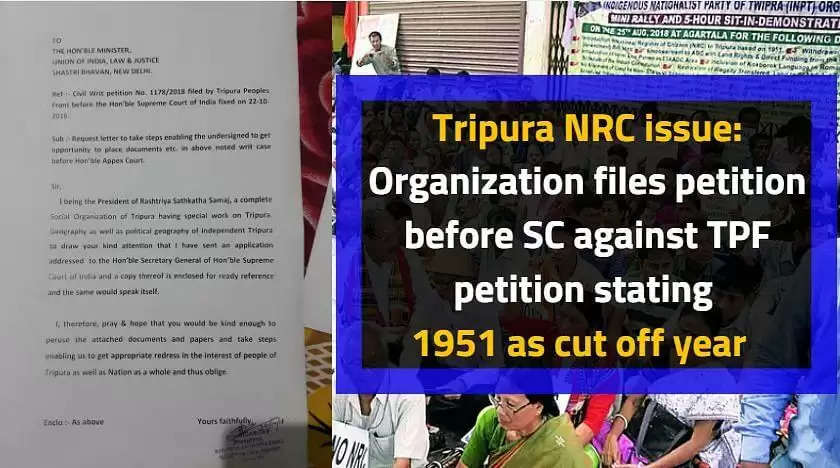 Just a day after it was announced that Tripura's Royal Scion Pradyot Kishore Manikya Debbarma would be filing a petition in the apex court for implementation of NRC in state, a social organisation within the state Rashtriya Sathkatha Samaj members have filed a petition in the Supreme Court demanding that NRC and that if implemented, then the procedure must be same for Indigenous and Non-Indigenous population of the state.

Rashtriya Sathkatha Samaj also claimed in the petition that Comilla area of Bangladesh is not a part of Bangladesh's national flag. Moreover in Bangladesh flag Comilla and Chakla Rosonabad (Comilla Division) has been shown as part of Tripura . So, the organisation demanded that Indian government take necessary action to bring back their 'own land'.

The case was filed against the 'Civil Writ Petition No. 1178/2018' filed by Tripura People's Front (TPF) led by Patal Kanya Jamatia in Supreme Court demanding NRC in Tripura from 1951 rejecting the Indira-Mujib accord of 1971.

While speaking to TNT- The Northeast Today, President of Rashtriya Sathkatha Samaj, Advocate Chanddan De said, "We have disposed eleven petition to the Honorable Supreme Court. Actually we have filed the petition against the petition filed by TPF in which they have claimed that one particular community has illegally entered Tripura. But we have collected a written letter of Ex-King of Tripura in which he has mentioned in 1809 that in Tripura all official work can be done in Bengali which proves that Bengali community was in good number in the state. We have also claimed in the petition that Comilla area of Bangladesh is not a part of Bangladesh's national flag as in Bangladesh flag Comilla and Chakla Rosonabad (Comilla Division) has been shown as a part of Tripura."

He further added, " We have collected documents in which it is clearly shown that there are 45 Indigenous community in Bangladesh out of which the population of Tipra's and Chakma's are in millions. We also have documents which prove that for last few decades due to patronising behavior of the past government for one particular community, camps were being set up in Tripura and Permanent Resident Certificate of Tripura (PRTC) were given to the people of that community who had came from Bangladesh. We also have proof that many Indigenous communities in the state are from Burma. So, our demand is very clear that if NRC has to be implemented in Tripura than same procedure of verification and documentation must be implemented for all communities. Law is equal for all."

Many Bengali and Non-Bengali organisation according to De have came forward with their organisation and they are ready to fight to any extent.

" What is happening in Tripura now is that one particular community is being targeted and are humiliated by calling them refugees. What kind of language is this? Who has given them the right? This time we have gathered all the documents and many organisations from Tripura as well as from outside Tripura have came forward and if necessary will hit the streets. Our community is ready and capable of battle legally or in any other democratic process:, De added.

The matter has also been apprised to Rashtriya Swayamsevak Sangh Chief, Mohan Bhagwat.

"We have also submitted all the documents and discussed the issue with Mohan Bhagwatji and he has assured us that he will look into the matter and talk at the Ministerial level", said Rashtriya Sathkatha Samaj, President De.