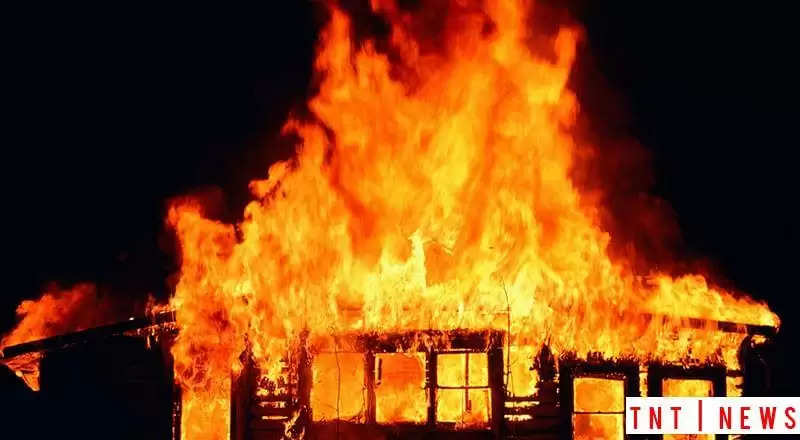 At least 10 persons were injured in the clashes.

According to local sources, a team of IPFT supporters gathered at Khumulwng to hold a rally around 3:30 PM this afternoon.

Soon after, clashes ensued among them and local CPI (M) supporters. The tribal party supporters, who have been agitating for a separate state for indigenous people in Tripura, were found burning the local communist party office.

Apart from this, at least 28 motor cycles and some other vehicles were set ablaze while they ravaged the area.

Local residents fled their homes in panic. Police personnel from Radhapur and Khumulwng police stations rushed in to take control of the situation after around 30 minutes.

By the time, the local CPI (M) party had turned to ashes along with burning motorcycles.

When asked about his take on the issue, IPFT General Secretary Mewar Kumar Jamatia said, "Our boys had lost their patience".

He claimed that some CPI (M) supporters attacked their scheduled meeting and damaged microphones, stages, chairs and other equipments that were gathered for the meeting.

"Our boys were few in numbers at the time and they (CPIM) thrashed them away. IPFT supporters gathering in relatively large numbers later", Mewar said.

He said that CPI (M) had also gathered some 30-40 supporters in front of their party office once IPFT supporters started coming back.

"IPFT supporters were beaten, 4 were hospitalized. And then there was such a large assemblage in front of the party office. Our boys might have thought that they were planning to attack again. They lost patience and some motorcycles were broken. The CPI (M) party office was somewhat damaged too", the IPFT leader said.

When asked if it was the answer of his party to any sort of violence upon IPFT members, Mewar said that he and his party condemned the incident.

"Irrespective of attack launched upon us, this shouldn't have happened. People from both parties should exercise more calm and peace", he said.

Mewar didn't say anything about taking action against IPFT supporters involved in the attack today anyway.

Meanwhile, a FIR was lodged against 8 CPI (M) supporters at the local police station on the part of IPFT. A counter FIR was lodged by CPI (M). There were no arrests till latest reports came in.

Restriction in public movement was imposed on the entire area for the night by the local administration.

CPI (M) state secretary Bijan Dhar condemned the incident and said that IPFT was trying to get narrow political gains by resorting to violence, now that people have rejected them in democratic agendas.

"We demand immediate arrest of all who were involved in the attack upon our workers and our party office. We ask one and all to stand up against such hooliganism and violence in the name of politics", Dhar said.

Two CPI (M) workers injured in the clash were admitted to GB Hospital while four IPFT supporters were shifted to Khumulwng Hospital.

There was simmering tension in entire Khumulwng area till late night.

Image is representational from Internet sources