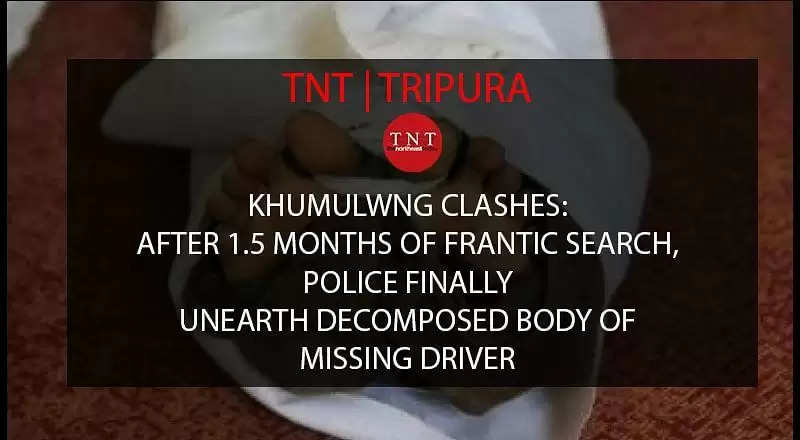 Agartala, November 05: After frantic search for almost 1.5 months since driver Jeevan Debnath went missing during IPFT-GMP clashes at Khumulwng on September 20, the police yesterday recovered his decomposed remains from Sukhiakobra village in Radhapur.

The police on Saturday issued an official statement saying that Jeevan went missing from Dukmali Bazaar in Khumulwng when he was driving one Sajjan Kumar from Delhi and one Biswajit Debbarma of Agartala. Kumar reportedly identified himself as a journalist. The duo fled the scene and took shelter in a nearby school.

No trace as found of Jeevan since then and it was suspected that he might have been lynched, the police said.

A search operation was subsequently started by the Tripura State Rifles (TSR) and the CRPF in adjoining areas.

Later, in the course of investigation into the issue, two suspects were arrested.

"Based on their interrogation and secret sources, we identified possible spots where Jeevan Debnath might have been lynched and his body was disposed", Superintendent of Police (West) Abhijit Saptarshi told this correspondent.

Jeevan's remains were recovered at Sukhiakobra yesterday in the presence of Sub-Divisional Magistrate and a large CRPF contingent.

The police have claimed that two individuals arrested as suspect in the driver abduction case had lynched Jeevan Debnath as suspected and disposed off his body. The body was sent for forensic tests.

The arrested two are currently under judicial custody; further investigation is underway.

A young television journalist Shantanu Bhowmik was brutally killed while covering the clashes on the day. Several others were injured, vehicles, party offices, public property were ravaged, set ablaze by mob on the day.

The police arrested Balendra Debbarma and Sharan Debbarma under suspicion of his involvement in the missing of Jiban Debnath. Villagers later tried to free him by launching attack on the police outpost where he was held. The police had to resort to lathi charge, tear gas and black fire to disperse the mob. Similar resistance against arrests of suspects continued in different parts of the state till recently.

The communist party charged the Indigenous Peoples Front of Tripura (IPFT) of kidnapping and murdering Debnath apart from murdering television journalist Shantanu Bhowmik and injuring several others in the clashes that occurred between IPFT and GMP supporters at Khumulwng.

"IPFT leaders were engaged in misleading the investigation by accusing the police of arresting IPFT supporters by design. The party also said that human rights were violated by wanton excavation in the name of hunting out the body. Well, the truth is in the open now", the CPI (M) said.

The party expressed satisfaction at the progress of police investigation and demanded to book all involved individuals as soon as possible.

IPFT has ever since the clashes denied all charges leveled against them. The party's general secretary and youth leader Mewar Kumar Jamatia said that his party demanded CBI enquiry into the issue to unearth the truth.

"There is a tendency to blame IPFT for every single thing. We feel there is political vendetta behind it. We don't have faith in the Special Investigation Team (SIT) that the government has formed. We want CBI", Jamatia said.