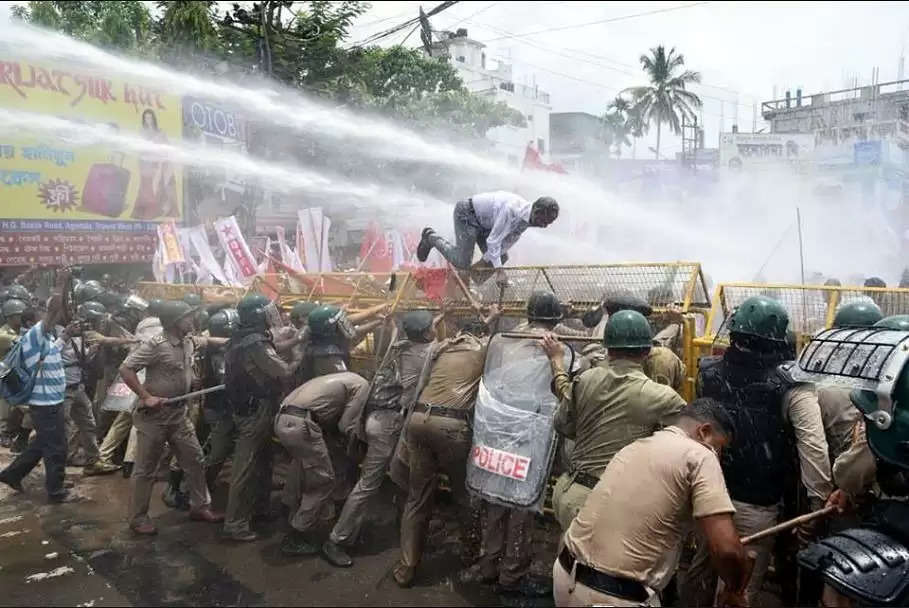 CPI-M Backed CITU today observed "Jail Bharo Andolan" to protest against the "mis-governance" of the BJP-led Central government and highlighted the distress of the working class.  "Jail Bharo Andolan" is being observed by CPI(M) all across the country and mainly in Tripura and West Bengal where the Left parties have/had a stronghold.

A huge protest rally was held at Paradise Chowmuhani where police had to fire tear gas and used water cannons to disperse the crowd.  The rally began from Melarmath and was led by Ex- Chief Minister and Leader of Opposition Manik Sarkar.

Addressing the rally, Ex- Chief Minister and Leader of Opposition Manik Sarkar said, " Under the NDA government led by Prime Minister Narendra Modi, the working class and the laborers are not only economically dejected but also deprived of their legitimate rights.  After PM Narendra Modi came to power, none of the promises were fulfilled by the party and the life of the wage class labors has turned into distress".

Many CPI(M) activists were injured and arrested during the protest rally. Around 200 CPI(M) have been arrested in Udaipur as well.