Tripura: All tribal laws to be codified under TTAADC 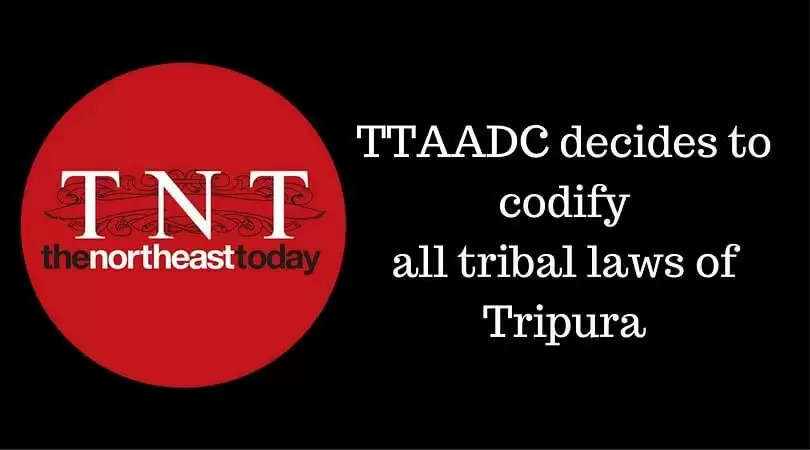 Agartala, December 6, 2017: The Tripura Tribal Areas Autonomous District Council (TTAADC) has decided to codify the prevailing customary laws among all the tribal groups and clans in the state to maintain the existing culture and tradition.

Chief Executive Member of TTAADC Radha Charan Debbarma mentioned about TTAADC's decision to codify the customary laws in a meeting with the tribal leaders held in Khumulung. The meeting was attended by TTAADC Customary Law committee Chairman Joy Bahadur Jamatia and leaders of eight tribal groups.

"Henceforth, we will go on passing customary laws of one tribe or group in every session of the TTAADC and will complete the process as early as possible," Radha Charan said.

Leaders of various tribes— Shanti Reang, Ajita Tripura, Sachin Debbarma, Linckon Reang and Shanti Bikash Chakma— also supported the move and said it will help in maintaining separate identity of each of the tribal group.

A move to codify all customary laws of all the tribes begun in 1995 but the TTAADC could codify only the customary laws of the second largest tribal group of the state – Jamatia — which has a four hundred year long tradition of practicing certain laws through their highest body called Jamatia Hoda.

The Jamatia customary laws were codified through legislation in the TTAADC in September 1, 2017. The Jamatia Customary Law passed by the TTAADC deals with almost all aspects of the society, including inheritance of property, marriage and divorce.

Another provision incudes drinking of liquor by minor a punishable offence. This new provision was necessary because it is  a menace to society as drinking liquor has been made part and parcel of any religious or social gathering.

TNT News with inputs from The Sentinel