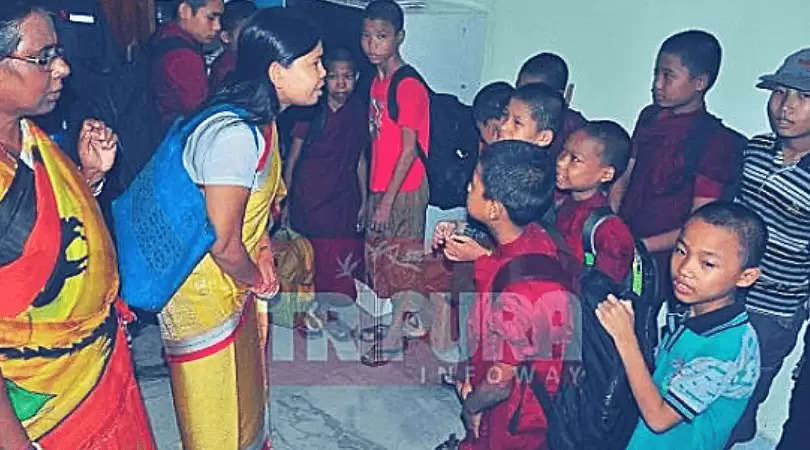 At least eighteen children from the state were recovered from a Buddhist missionary in Bihar and were brought back to Tripura on Friday evening.

An official has alleged that there were signs of torture on them. Most of these children were sent by their families to study in Buddhist institutions two years ago, officials said.

An official of Bihar Police, while speaking to Indianexpress said, they studied at a Buddhist religious institution in Bihar, which closed down two months back. The children were recovered by Bihar Police and kept under protective care for a few days after which they were sent back to their respective homes, the official, who didn't wish to be named, said.

He also informed that children belonging to Assam were also recovered from the Buddhist educational institution in Bihar. They were handed over to authorities at Guwahati Railway Station on their way back to Tripura.

Minister for Health and Family Welfare Sudip Roy Barman reached Agartala Railway Station to receive the children on Friday evening. "Our children have returned to Tripura. It is a sigh of relief. The Department of Tribal Welfare will write to Bihar for proper investigation of the incident. We don't want any child to go to other states without the knowledge of the state government. It is an eye-opener for all of us", Roy Barman said.

According to Tripura State Child Welfare Society chairperson Nilima Ghosh, there were signs of torture on the bodies. She also said the families had to pay money for their children's education at the Buddhist mission-run school in Bihar.

"We have got reports that some people took money from parents of children for studies in Buddhist-run schools in Bihar. We were also informed that the children were tortured there. I have met them and seen them wearing unhygienic clothes and having torture signs on their person", Ghosh said.

She added that she will discuss the matter with the health minister. She also assured that the children welfare society would soon take legal action on this issue.