Sikkim: Political one-upmanship on ‘One Family One Job’ scheme continues 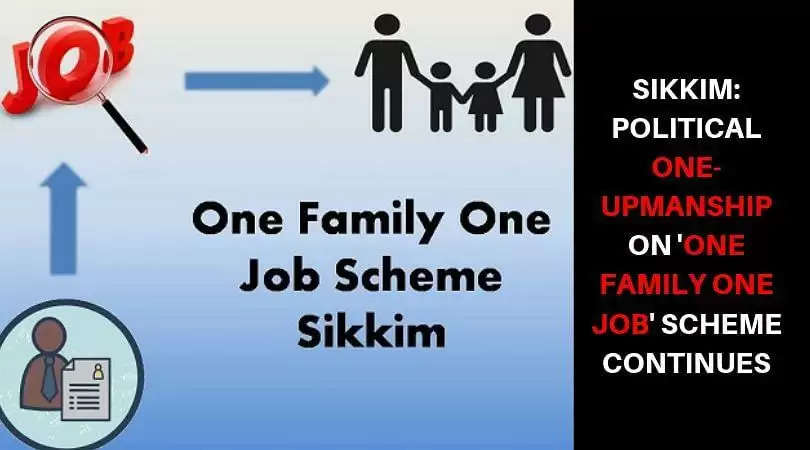 "One Family One Job" (OFOJ), a popular scheme of the previous state government –  which provides temporary jobs to one individual in every family –  has come under scanner in the new Sikkim Krantikari Morcha (SKM) led government.

It may be mentioned that the State's Department of Personnel (DoP) issued a circular on May 31 asking the heads of all departments to submit a list of 'One Family, One Job' recruits, who reported for duty after enforcement of Model Code of Conduct on March 8.

The circular states that many departments accepted the OFOJ candidates during the enforcement of the Model Code of Conduct in the State and stated that allowing candidates to report for duty during the Model Code of Conduct violates the norms of the Election Commission and the concerned department or officer would be liable to be penalised under the established norms of the Election Commission of India.

On the same, DoP requested all secretaries to immediately withhold and cancel the joining of all the candidates under OFOJ scheme along with those candidates appointed under temporary basis who have 'reported for duty after the enforcement of Model Code of Conduct and list of such candidates along with their appointment orders may be forwarded to this department by June 10.

Opposition Sikkim Democratic Front (SDF) Party warned that if the Department of Personnel did not withdraw its recent circular on the One Family One Job scheme beneficiaries within one week, then the SDF party will go to the court.

The party further alleged of the political pressure on the concerned department to take out this office order.

"We give two weeks' time to the department to withdraw this or face legal action," said SDF Spokesperson, MK Subba.

Meanwhile, ruling SKM's Spokesperson and Political Secretary to CM, Jacob Khaling stated that the government has started the scrutiny process to regularise the OFOJ employees.

ALSO READ | Sikkim: Golay does not have the right to become CM, says Chamling

He stated that as many appointments in this scheme have been made in backdate and during the implementation of the model code of conduct period by earlier government, therefore, it has just been suspended for time being to give justice to the genuine beneficiaries.

He stressed that after all scrutiny and other process, all genuine beneficiaries will definitely get jobs under this scheme.