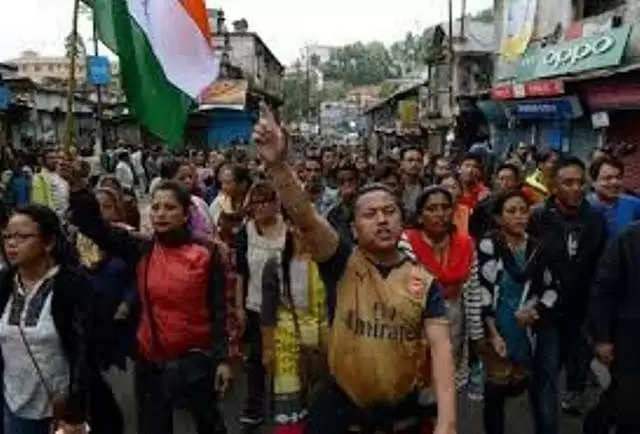 Gangtok July 7: The Sikkim Government is reportedly considering to sue the West Bengal government, alleging heavy loss of revenue because of the Gorkhaland agitation.

Sikkim has reportedly decided to file a case in the Supreme Court against West Bengal.

Sources informed that the Sikkim government has assess a lost of around Rs. 60,000 crore over the past 32 years because of the agitation for a new state of "Gorkhaland" to be carved out of West Bengal.

The development comes in the middle of a standoff next to Sikkim – which borders China – after Chinese troops tried to build a road near the India, China, Bhutan tri-junction last month.

Sikkim's Chief Minister Pawan Chamling said yesterday: "The people of Sikkim did not merge the state with the Indian union to become a sandwich between China and Bengal."

He was condemning attacks on vehicles from Sikkim on the highway over the past two days. The attacks started after his letter to Home Minister Rajnath Singh calling a separate Gorkhaland a "justified long-pending demand" of the people of the Darjeeling hills.
Blockades due to the agitation by Gorkha groups have impacted Sikkim because is connected to two highways that pass through the north Bengal hills. Mr Chamling said his state's development had been hit for three decades because of the protests and blockades, and tourism had also been affected.

He urged people not to panic over any talk of scarcity of food and essential commodities because of the blockades.

The decades-old demand for a Gorkhaland saw a fresh burst of violence recently in Bengal over fears that the state government was imposing a Bengali-only rule on schools in Darjeeling – where the majority of the population speaks Nepali.

The Gorkhaland agitation is on-going till date.

TNT News with inputs from NDTV