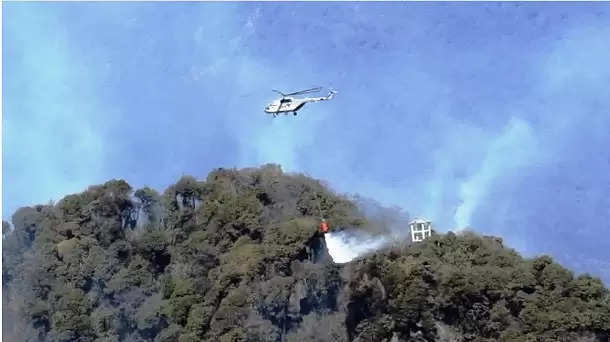 GANGTOK: A major forest fire has broken out at Tinjurey Ridge in Fambanglho Wildlife Sanctuary, about 10 km from here in East district, official sources said.

Indian Air Force (IAF) helicopters were pressed into service on the request of the Sikkim government to air drop water to control the fire as the ridge is an inaccessible cliff terrain, they said.

About 18 sorties have been carried out by the IAF helicopters to douse the fire that broke out above Nampong village area, they said.

The fire broke out on February 4 but a team consisting of forest, police, civil and fire service officials together with the local panchayat, joint forest management committee members and villagers reached the spot yesterday as the area is inaccessible and started the fire fighting operations.

Drought-like conditions in the state have rendered forest areas vulnerable to forest fires.

The Forest department has asked people in general and villagers residing close to forest areas all over the State to avoid going into forest areas for picnic, camping or any other purpose with inflammable materials.