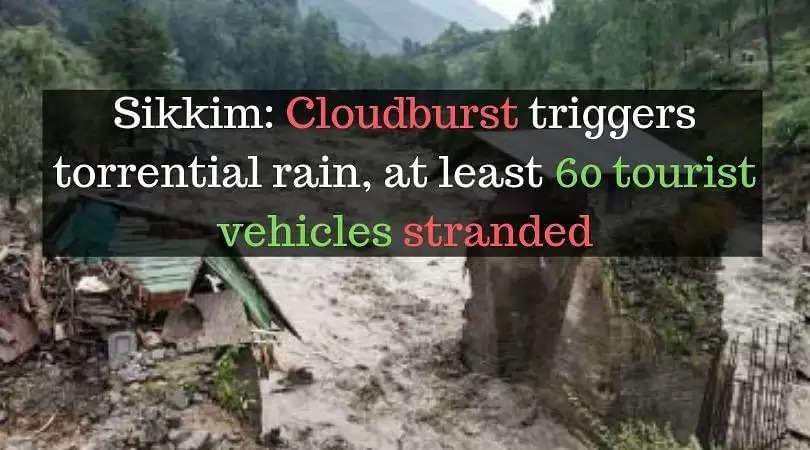 The cloudburst in Sikkim triggered torrential rain in parts of the state and at least 60 tourist vehicle have been stranded in North Sikkim on Monday, an official said.

Due to rainfall, many vehicle got stuck between Lachen and Zema 3,
North Sikkim District Collector Raj Yadav said.

Efforts are underway to evacuate the stranded tourists first to Lachen and then to Gangtok possibly by Tuesday if the weather becomes clear, the official said without mentioning the number of visitors.

Chief Minister PS Golay directed the authorities to clear the road as soon as possible for the passage of the vehicles carrying tourists to their respective destinations.

Golay also directed the authorities to extend all help to the tourists and the general public who are suffering because of the calamity, an official release said here.

The North Sikkim district collector said it has been decided not to issue tourist permit for the time for Dzongu, Lachen and Lachung due to the inclement weather conditions.

Tourists need to cross Lachen to visit Chopta Valley and the Gurudongmar Lake while Lachung is a town on the way to picturesque Yumthang valley in North Sikkim, the collector said.

Earlier, the cloudburst caused rain in the upper reaches of the Teesta river and the Teesta III hydropower project authorities have released 600 cusecs of water from the Chungathang dam, Yadav said.

The people of Lachen and Chungthang have been alerted about the situation, he said.

A heavy inflow of muddy water and logs was reported to be coming towards Dickchu Teesta V dam from 2.30 pm onwards due to the cloudburst, the district collector said.

Residents of Singtam and Rangpo have been alerted about the sudden spate in Teesta river through its downstream which flows downwards through East Sikkim, he said.