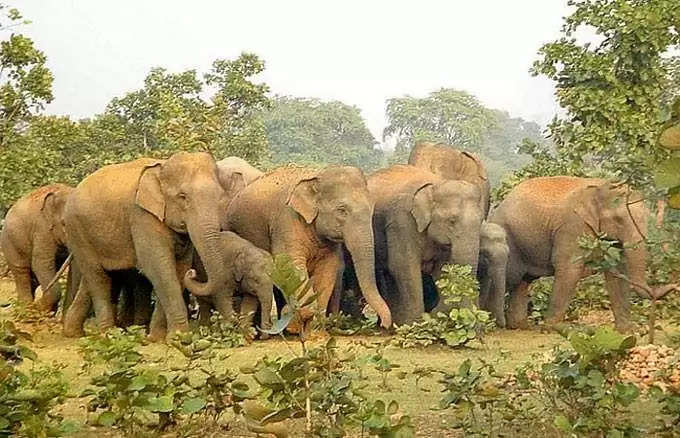 July 21, 2017: Amisdst all the atrocities by people against animals, there exist a small tea farmer Tenzing Bodosa's plantations along India-Bhutan international border in Assam's Udalguri district has become world's first to get the coveted Elephant friendly Certified tea, an initiative launched by the Wildlife friendly Enterprise Network(WFEN) and University of Montana, USA. to raise fund for Asian elephant conservation.

"Yes, Tenzing's (two) plantations were the first to become Certified Elephant Friendly  in all of India, and in fact, the first in the world. There is interest in the certification program in Sri Lanka and Kenya, and in fact wherever tea and wild elephants overlap there is potential for tea and coffee plantations to work towards certification as Elephant Friendly", WFEN executive director Julie Stein said.

Stein said the objective of the certification is to support elephant conservation by creating opportunity for tea growers to obtain premium prices for their tea and by making sure that the tea that consumers drink is "not harmful to elephants".

WFEN promotes development of products and tourism that contribute to the conservation of threatened wildlife species and economic vitality of rural communities.

Lisa Mills who liaisons for the University of Montana on this project said, "With a percentage of every sale going back to support elephant conservation in the communities where the tea is grown, tea drinkers can enjoy great tea while supporting human-elephant coexistence."

Tenzing's plantations went through a rigorous process of adherence to standards developed by WFEN and University of Montana for getting the certificate under the pilot program for small tea growers. The standards have been developed to find out whether a plantation is free of key issues that harm elephants like the risk of electrocution, injury or death of elephants by falling on drains, risk of poisoning elephants from chemicals and blocking elephant corridors among several others criteria.

"To be certified under this program tea growers must meet strict 'elephant friendly' standards which have been vetted by experts on elephants in this part of the world," Stein explained.

Tenzing said the certification was recognition to his efforts since 2007 to make his tea plantations as elephant-friendly as possible by adoption of organic means of cultivation.
"In fact, I proudly say my plantations are refuge for the wild jumbo herds. I have planted bamboos on which the elephants feed. There is no barriers in and around my plantations. Even hornbills and deer frequent by plantations. My endeavor has proved that you can go for tea cultivation and also maintain the ecological balance," the 30-year old tea farmer said.
Ironically, Udalguri happens to be one of the most human-elephant conflict prone areas in Assam, resulting to deaths of jumbos and humans almost every year. According to conservative estimate last year alone, at least 20 persons and five elephants were killed in Udalguri. Most of the conflict is concentrated in villages and tea gardens along the international border.
TNT News with inputs from The Times Of India