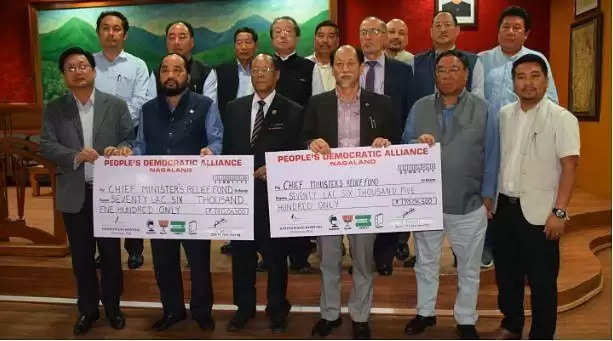 In a bid to provide financial assistance to the victims affected by natural calamities triggered by heavy rains which hit Nagaland these past few weeks, the MLAs and party functionaries of the ruling People's Democratic Alliance (PDA) contributed a total of Rs. 70,06,500 to the Chief Minister's Relief Fund.

Earlier, the PDA and Nationalist Democratic Progressive Party (NDPP) have called upon its MLA and party party functionaries appointed in government positions, contributions from party rank and file, to assist and support in the relief and rehabilitation of those affected by natural calamities by contributing their one month's salary to the relief fund.

Recently, Nagaland Governor P B Acharya announced a contribution of one lakh rupees from his salary towards the Chief Minister's Relief Fund in aid of the people affected due to incessant rainfall in the last few weeks resulting in a major disaster.