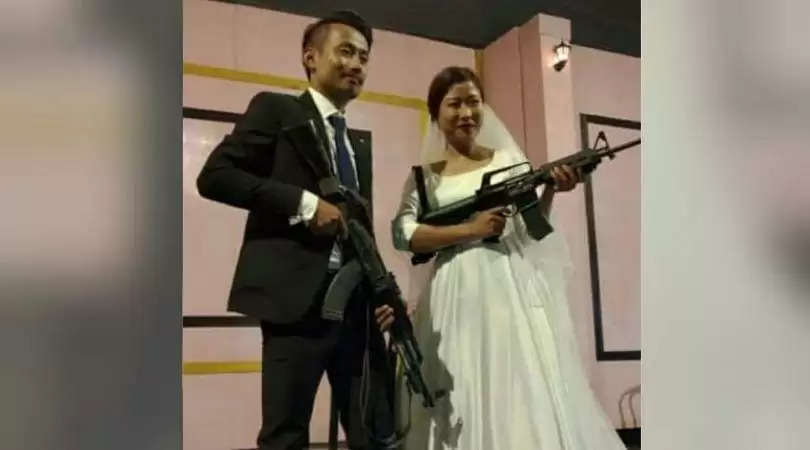 A photograph of a bride and groom brandishing sophisticated assault rifles at their wedding on Saturday in this commercial town of Nagaland has gone viral online.

On November 9, Bohoto Kiba, son of Kilo Kilonser of the militant National Socialist Council of Nagaland-Unification (NSCN-U), got married in Dimapur district.

The bride and groom were seen brandishing automatic rifles – M16 and AK 56 – during the wedding reception attended by their invited guests.

The guests were stunned on seeing that the newly-wed couple displaying the shiny rifles at the wedding feast.

ALSO READ: Facts you need to know about Nagaland CM Neiphiu Rio, on his birthday!

Kiba is a powerful Naga rebel leader, who had courted controversy by threatening journalists in Nagaland in 2012. The top militant leader had threatened to shoot members of the press.

"I haven't seen the picture (bride and groom brandishing automatic rifles) and I am not aware of it," Nagaland police chief, T. John Longkumer told IANS.

However, senior police officials said that the bride and groom should be arrested for displaying illegal arms which is prohibited under Arms Act 1959.

The NSCN-U faction is also one of the seven Naga groups holding peace talks with the government.