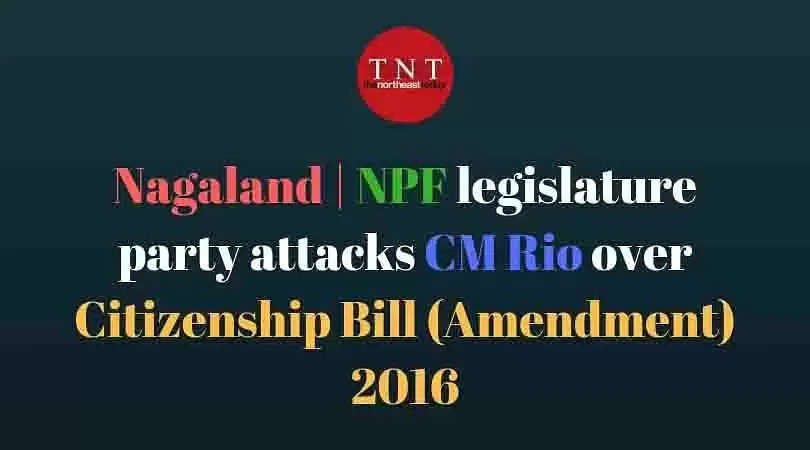 KOHIMA, January 10, 2019: NPF legislature party on Wednesday accused the state chief minister Neiphiu Rio of making contradictory statements on the Citizenship Bill (Amendment) 2016 and asked him to "assuredly state" as to what was the stand of the PDA government on the issue.

In a press release, NPF legislature party spokesperson Imkong L Imchen said he "shudder to think of the state of Nagas" should the chief minister continue to lead Nagaland at this pace and trend.

After the formation of PDA government, Imchen said the cabinet had a sitting to deliberate on the issue of Citizenship (Amendment) Bill 2016, and Rio had boldly stated that they would not oppose the Bill, as the state of Nagaland was protected under Article 371(A) of the Constitution of India and Bengal Eastern Frontier Regulation of 1873 (Inner Line Permit).

According to NPF legislature party spokesperson, Rio further took his team of cabinet to Delhi to meet the union home minister and "categorically" told the home minister that he would not oppose the bill.

Imchen said NPF had "downrightly refuted" this claim of the chief minister and demanded that the state government oppose the Bill as Nagaland was vulnerable vis-à-vis the illegal immigrants, and the repercussions of the controversial Bill would be disastrous to the future of Nagas.

NPF party, with genuine concern for the welfare and future of the Nagas, has in the last few days raised this issue again, he said, adding that subsequently, the PDA government had a cabinet meeting on January 7, 2019 to once again deliberate on the issue. However, he said disappointingly the decision of the cabinet was "to urge the Centre to re-examine and review" the controversial bill.

Imchen said no mention were made as in what form to 'Re-examine and Review' as the Bill has been passed in the Lok Sabha.

"One moment, the chief minister says we are protected and will not oppose the Bill, next he goes on to say that if it goes 'against the interest of the Nagas' he would oppose and now he seeks the Centre to 'Re-examine and Review'. Would the chief minister for once, assuredly state as to what is the stand of the PDA government?" Imchen asked.

Further, NPF legislature party spokesperson said the party had also sought to raise the issue in the second session of the assembly and accordingly the subject was listed in the Business list of the day, but "bizarrely" the speaker refused to let the NPF MLAs to delve on the subject.

Also, Imchen said the leader of NPF legislature party, TR Zeliang, had written a letter to the chief minister on the subject on July 16, 2018, seeking clarification on the stand of PDA government.

"Opportunist leaders are cowards and would always lean on the winning side no matter the peril and would never risk his position for the posterity and well being of his people," Imchen said, adding that this was "exactly what Rio is doing despite the clear indication of the dangers that awaits the future of Nagas, should the Bill be passed in Rajya Sabha and assented by the President of India."

Taking on the centre over the bill, Imchen said even as the Nagas were crying politically or otherwise to defend their integrity and identity at any cost, it brought about a legal passage for the illegal immigrants to swarm North-eastern states and Nagaland in particular.

He maintained that Article 371(A) of the Constitution would also become redundant once the bill was passed and becomes a law.

Imchen warned that PDA government headed by Rio would be solely answerable to the posterity of the Naga people, saying the chief minister has not uttered a single word against this controversial Bill. "Rather he has surreptitiously supported the Bill at the expense of the Naga people so that he can continue to cling on to his dilapidated chair which will eventually crush on its own," Imchen claimed.