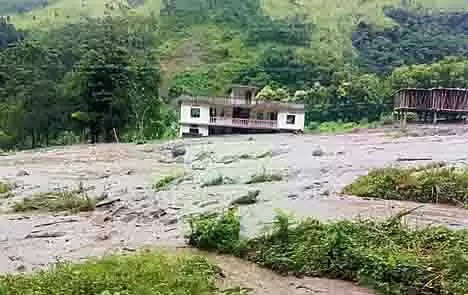 DIMAPUR, August 3, 2018: Landslides triggered by incessant rains damaged 61 roads in Nagaland and cut off many areas in the state, said an official report on Thursday.

The state home department has tied up with the Union ministry of home affairs to airlift essential commodities to the cut-off areas. However, the operation has been hampered by inclement weather.

The release stated that Kiphire district has become inaccessible to the rest of state after all the roads leading to the district were completely cut off.

The release added that the Kiphire to Tuensang road remains blocked near Yahi Bridge. The Kiphire to Zuhneboto road have no bridge over Tutha River as it was washed away a few years back. A heavy landslide has also blocked the road between Seyochung town and Sitimi town.

The department of food and civil supplies has readied foodgrains for transport as and when the air-lifting is feasible.

The release also said the state government was making all out efforts to send essential commodities, including petroleum products, to Kiphire and Pungro areas, which have been completely cut off by massive landslides.

According to the Kiphire district administration, the district has food stocks to last for a couple of days and rationing has been imposed for both food and petroleum products.

The officers from the district administration of both Kiphire and Meluri have been camping at the spot where a large section of the road has sunk, 8km from Meluri side.

The administration, with the help of volunteers, has constructed temporary transit camps to facilitate carrying of essential commodities to the affected area from where trucks can transport the goods to Kiphire.

The Assam Rifles have also contributed two JCBs and a bulldozer for the purposes of restoration and construction.