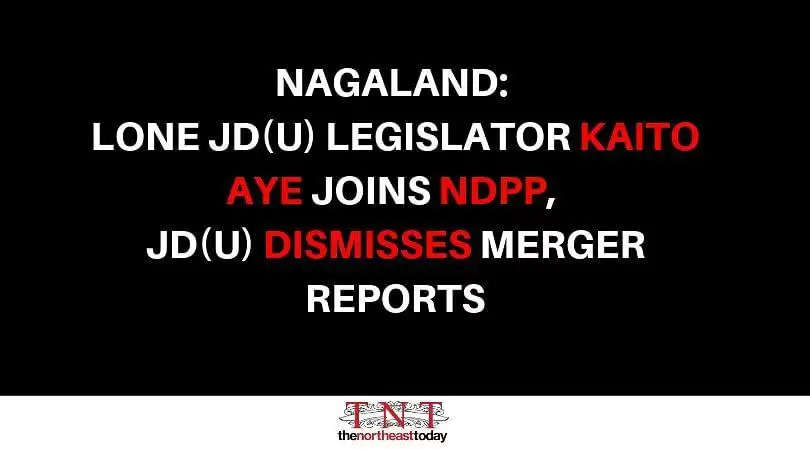 Confusion surrounds the merger of JD (U) with the ruling Nationalist Democratic Progressive Party (NDPP) with some party members of Janata Dal (United) dismissing any such move.

The JD (U) Nagaland Unit on Monday dismissed reports of party office bearers merging with NDPP and said that only its lone legislator in the State, G Kaito Aye along party ex-candidates who contested in the last Assembly Polls merged with the ruling party.

It may be mentioned that the NDPP on Monday officially announced the merger of JD(U) Nagaland unit led by Aye merged with the ruling party to 'ensure stability of the PDA government'.

Interesting the JD (U) Nagaland Unit President Senchumo (NSN) Lotha, however, said that not a single party worker was with Aye and the other ex-candidates while adding that the party state unit remains intact.

Meanwhile, in a statement issued to the media on Tuesday, the lone JD(U) legislator, G Kaito Aye has dispelled all doubts and confusion by announcing his move to join the NDPP.

"Keeping in mind the interest of my people, their sustenance and overall development, and further in the interest of the people of Nagaland, vis-a-vis the Naga Peace Accord, I have taken the step to join the NDPP," said Aye.

He further stated that his decision to join the NDPP is selfless and not out to any political compulsion.

Furthermore, he informed that on June 19, an emergency meeting was convened by the Chairman of JD(U), Nagaland unit at the residence of Aye to deliberate on the present political scenario in the state and the members present in the meeting unanimously adopted three resolutions: to merge with NDPP under Aye's leadership, to strengthen the PDA government through their merger and to further facilitate the ongoing peace process and strengthen the framework agreement.

Aye informed that 10 members including the ex-candidates and executive members, office bearers attended the meeting.