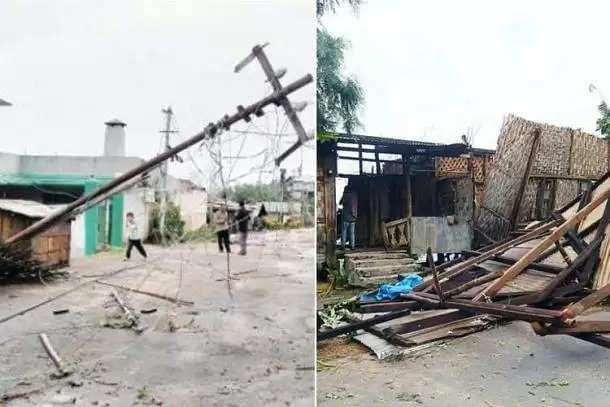 KOHIMA, April 3: North East India, including Nagaland, has been witnessing heavy spells of torrential rain accompanied by squalls and storms which resulted in damage of houses, landslides and hailstorms since last night.

Reports from various districts in Nagaland received so far said that the pre-monsoon rain are occurring in almost all the districts, which beside disrupting normal life, has led to damages to property and crops.

A strong wind accompanied by heavy rain has also caused extensive damages. The storm lasted nearly one hour. While not ruling out widespread damages across the state due to the rains, officials at Nagaland State Disaster Management Authority (NSDMA) said that it was still compiling reports from various districts in the state.

However, NDSMA preliminary assessment reported damages to property and crops.

At Sakraba Village in Chizami Block under Phek district, some paddy fieldswere destroyed completely due to excess rainfall leading to landslide. In Zunheboto Town, there were reports of landslide in many areas due to heavy incessant rain though there were no reports of injury or loss of lives.

Reports also said that there were no major damages in Dimapur and Kohima. In Mon, reports are being awaited from outpost, NSDMA said adding that there also no report of damage to infrastructure or properties in Tuensang.

Reports of Wokha, Longleng, Kiphire, and Mokokchung are still awaited.

Meanwhile, the India Meteorological Department update today informed that the weather condition for the North East will remain the same in next 48 hours and heavy downpour lashed Kohima for the last five hours.