Nagaland: Fish gradually goes off market in the state following detection of formalin 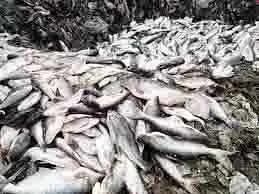 DIMAPUR, June 29, 2018: Even as fish is gradually going off the market in the state, following the order from the Nagaland Food Safety Commissioner banning storage and sale of formalin treated fish, more formalin laced fish were detected in Dimapur on Thursday.

The contaminated fish were detected at 6 locations from retailers. After camping in Kohima the past few days, the lone Mobile Food Safety Laboratory made the rounds today in Dimapur under the supervision of Food Safety officials.

Food Safety Officer (FSO), Sendong Jamir informed that the samples from the daily markets tested positive for formalin. Of the fish collected from Railway Bazaar, the FSO said that 4 samples out of five (different varieties) tested positive. The contaminated fish were impounded for disposal.

Earlier in the morning, Food Safety personnel alongwith the district administration visited the main fish distribution & auction site at Sema Tilla to collect samples from the main supply point. However, no stock was available as supply has stopped since the report of formalin contamination hit the news, the FSO informed.

DUCCF chairman, Tsenthungo Lotha asserted that the government must strictly implement the order till all contaminated fish is confiscated and destroyed. While maintaining that the government must ensure the import of safe fish and other food products, he added that the consumers should also report to the authorities when corrupt food items are detected or suspected of contamination.

The laboratory analyses thus far have returned 'positive results'. A bigger question though is how and where or at what point?

None of the local fish traders as well as the authorities, have been able to provide a suitable explanation till date.

According to Abdul Malik, a fish wholesaler, the bulk of the fish are sourced from Andhra Pradesh, Kolkata and Assam. He said that some 20-30 tonnes of fish reach Dimapur daily by road, a portion of which also go to Peren, Kohima, Phek, Wokha and even Imphal. Quoting retail vendors, he said that around 5-6 tonnes are sold daily in Dimapur.

The fish are boxed in ice-filled styrofoam containers, which are sealed at source, to be unsealed only after reaching the destination. He added that the sealed ice box normally lasts ten days, while the road journey from Andhra Pradesh to Dimapur takes 5-6 days.

"The distributors procure it in bulk from the source. They distribute it to the wholesalers, who in turn auction it to the retailers." He added that if there is any tampering of the seal midway, it can be physically detected.

Malik said that till the "allegation" is not cleared the distributors will withhold procurement and sale, while adding that supply has stopped since June 26.

He further contested that the authorities have yet to give them copies of the test results of the samples collected earlier this month.

"We have also taken our own samples and have sent it for independent laboratory analysis in Guwahati. We're expecting the test results soon," he informed.

Manzar Alam, who identified himself as an employee of one of the main distributors, held that the authorities should also give them copies of the earlier test results. "They have collected samples from us 2-3 times. They are saying it is positive but we have yet to witness with our own eyes the test results till date. If only they would give us the laboratory report, we'd get back to the suppliers at source and act accordingly," he maintained.

Reports of the tests of the samples collected on Thursday were however given to the wholesalers as well as retail vendors and also to the district administration.