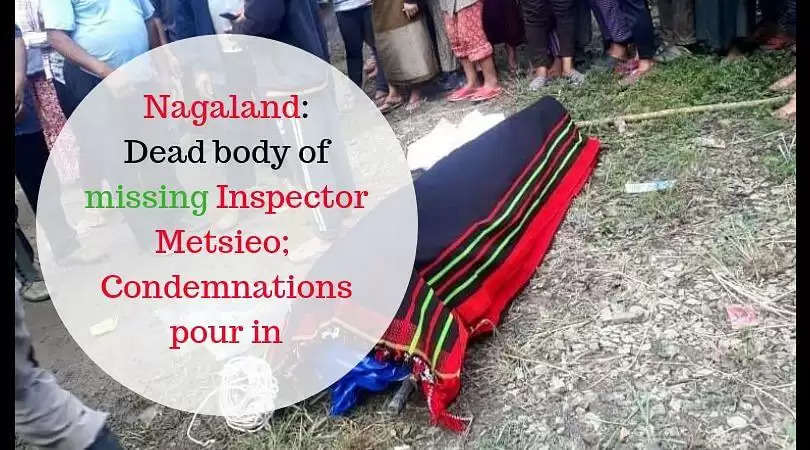 Almost after a week since a police officer was reported missing, his dead body was recovered today by a search team on the road between Zuketsa and Zapami under Phek District in Nagaland. He had been missing since September 7.

His death has sent shock waves across the state with several social organisations coming forward to condemn the brutal murder of police inspector of the C.Coy 5th NAP, Neiphretuo Metseio, a resident of Chiechama Village.

The Chakhesang Public Organisation (CPO) has also "vehemently" condemned the barbaric murder of Metseio. "Lt.Nephretuo Metsieo was a very sincere officer posted as Inspector of 5th NAP (SN) at Pfutsero," read the letter adding that the Chakhesangs shall not tolerate such act of barbarism on the part the murderers.

CPO also stated that the deceased was not way laid as presumed by some, but was "murdered in cold blood by the occupants in his car for reason best known to the perpetrators while he was proceeding to his place of posting at Pfutsero on the 7th of September 2018 from Kohima."

Furthermore, the CPO urged upon the Govt. investigating agencies and the administration to expedite the process of investigation, and leave no stone unturned to bring the culprits to book at the earliest. It also opined that such act of extreme cowardice deserves the highest degree of punishment, and urged the concern authorities to award befitting punishment to the perpetrators and deliver justice without any delay.

Meanwhile, the CPO cautioned social media users to refrain from spreading false rumours that could caused communalism, and further expressed its deepest heartfelt condolence to the grief stricken families of Lt. Neiphretuo Metsieo.
"We stand with you in solidarity at this hour of grief , sadness and pain , we stand with you as fellow Nagas . May God grant divine solace and comfort to your families, and welcome the dearly departed soul into His bosom", stated the CPO.

The NDPP appealed to the state government and the law enforcing agencies to leave no stone unturned so that the murderers are brought to justice at the earliest. The people are requested to extend their kind cooperation in the investigation process in the interest of justice.

The NDPP expressed deepest sympathies to the bereaved family members, relatives and friends of the late Metsieo. "May the departed soul rest in peace."