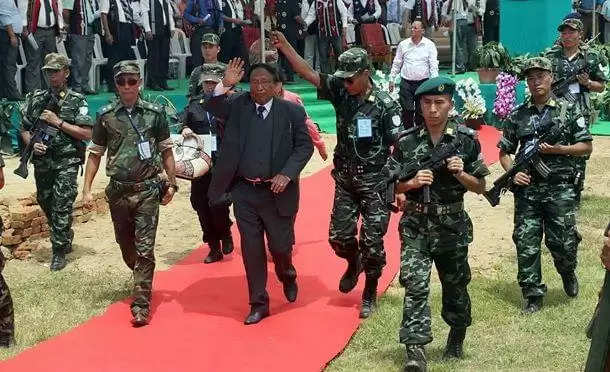 RTI activist Venkatesh Nayak had sought details of the "Framework Agreement" between the Government of India and the Nationalist Socialist Council of Nagaland Isak-Muivah (NSCN- IM) on August 3, 2015.

R N Ravi, Chairman, Joint Intelligence Committee and Interlocutor, told the CIC the ground situation was "sensitive and fragile", and the "premature release" of the information would be "prejudicial to national security".

"The Government does not wish to lose the gains arising out of the Framework Agreement," Chief Information Commissioner R K Mathur quoted Ravi as saying.

The transparency panel took a dig at the ministry, pointing out that it had taken the ministry months to identify that the records related to the agreement were under the Joint Intelligence Committee.

Information seeker Nayak claimed that a press release after the agreement was signed had said the "details and execution plan" would be released shortly. But even after 18 months, the information was still not out.

He said the extension of the Armed Forces Special Powers Act (AFSPA) in the region last December buttressed the argument that that there was a gap between "official talk" and the situation on the ground. This was why it was necessary to put out "authentic information" on the agreement for the general public, Nayak said.

He said there was growing uncertainty among the neighbouring states about the contents of the framework agreement "which clearly indicates a state of confusion prevalent among the voters of the North-East".

Mathur noted in his order that the complainant stressed the need to disclose the details of the agreement for "public interest".

He said Nayak asserted that what could be disclosed to a legislature or Parliament could not be denied to a citizen under the RTI Act.

"The framework agreement had been discussed by the interlocutor with the legislators of Nagaland and the same is, therefore, liable to be disclosed to the general public," Nayak told the Commission.

Mathur said while Nayak emphasised the immediate need for transparency for peace in the Northeast, Ravi said the framework agreement was in place, but the final agreement was yet to be arrived at.

"In the present case, the sovereignty and integrity of India and the security and strategic interests of the State may be prejudicially affected. The public interest served by non-disclosure has to be weighed against the immediate public interest of disclosure," Mathur said in the order.

He said an immediate disclosure would inform the public and all stakeholders about the current status and "thus help to develop an understanding and trust in the Government and promote peace in the North-East region".

But between the two "competing public interests", the Commission concluded that withholding information at this stage would help the government solve a long standing issue and bring about peace and prosperity.

"This option is, therefore, more beneficial and is accepted by the Commission," it said.