Naga bodies want Dimapur to be brought under ILP ambit 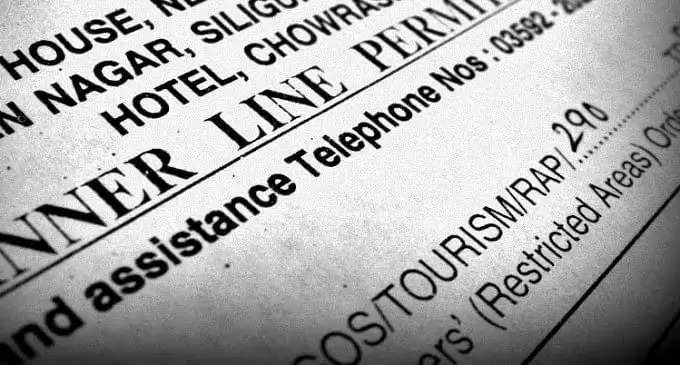 The Nagaland Tribes Council (NTC), Tribal Hohos and a group of civil organizations of Nagaland have decided in a recent meeting to ask the state government to make necessary amendments to the Bengal Eastern Frontier Regulation Act of 1873 to bring the entire state under the purview of the inner line permit (ILP) system. Demanding that Dimapur is brought under ILP, the bodies said the Nagaland government should strictly enforce all existing laws to protect the state's indigenous inhabitants from 'outsiders', including 'illegal' Bangladeshi immigrants, who may cross over into the state as a result of the National Register of Citizens (NRC) update exercise in Assam.

"The ILP has been partially enforced in Nagaland and Dimapur district does not come under its ambit. The de-reservation of Dimapur area has made it the buffer zone for the massive migration of illegal immigrants besides encouraging various exploitive activities against the indigenous Nagas of the state. Over the decades, Dimapur has allowed the uninhabited influx of a floating population as a result of which the state has now become flooded with doubtful citizens," an NTC spokesman said.

The three bodies reminded the state government that once the NRC is published in Assam, Nagaland will become the 'soft target' as illegal immigrants may start flooding into the state. "When Assam decides to drive out people who fail to prove their citizenship claims, Nagaland will become a safe haven for them. This will leave the state in a vulnerable condition," the spokesperson added.

A decision was also taken in the meeting to urge the state government to implement the Nagaland Land and Revenue (Amendment) Act of 1978 in letter and spirit to effectively protect and preserve the land of the indigenous people of the state. The Act allows only the indigenous inhabitants of Nagaland to acquire or posses land in any area of the state. The three bodies demanded that the state government revoke its 2014 resolution that proposes a Nagaland Special Development Zone (NSDZ). "This NSDZ will become a free zone for outsiders of any identity and allow them to own and pursue their business interests without restriction. The whole intention of setting up an NSDZ is to create an area for permanent settlement of outsiders within Nagaland. The state government should therefore revoke this resolution," the spokesman said.

On the controversial Citizenship (Amendment) Bill, 2016 – that seeks to grant citizenship to religious minorities from Afghanistan, Bangladesh and Pakistan – the three bodies opined that the bill will divide people along religious lines and pave the introduction of the Uniform Civil Code (UCC) across the country. Expressing solidarity with its neighbouring states that have expressed their opposition to the bill, the three bodies urged the Nagaland government to oppose the bill to preserve the interests of the indigenous inhabitants of the state.

"This bill was introduced with a communal agenda of granting citizenship to Hindus from the neighbouring countries. The influx of illegal immigrants, particularly from Bangladesh, has always been a contentious issue in the northeast and granting citizenship to them will pose a direct threat to the political identity of the region. This will also threaten the survival of the indigenous people in this region," the spokesman said.