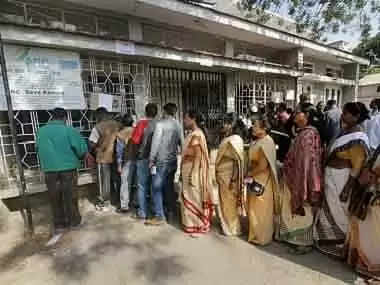 AGARTALA/AIZAWL/KOHIMA, August 31, 2018: Even as leaders of Tripura tribal parties press the Centre for the National Register of Citizens (NRC) in the state, various parties in Mizoram and Nagaland too have also started demanding the NRC in their states.

Leaders of Indigenous Nationalist Party of Tripura (INPT) and Indigenous People's Front of Tripura (IPFT) during the past two days have met various Central authorities and ministers in Delhi and demanded preparation of the NRC in Tripura on the lines of Assam.

Meanwhile, Mizoram's all powerful NGO, Young Mizo Association (YMA), has raised a similar demand in the Christian-dominated state while the Nagaland unit of Janata Dal (United) has demanded introduction of NRC in the tribal-dominated state.

"We have submitted a memorandum to the Registrar General and Census Commissioner of India in Delhi explaining the reasons for NRC in Tripura. We are also trying to meet Union Home Minister Rajnath Singh," INPT General Secretary Jagadhish Debbarma told IANS over phone from Delhi on Thursday.

He said that INPT's other demands include more constitutional power to the Tripura Tribal Areas Autonomous District Council (TTAADC), withdrawal of the Citizenship (Amendment) Bill, 2016, introduction of inner-line permit in the TTAADC areas and inclusion of tribals' Kokborok language in the 8th Schedule of the Constitution.

Another delegation of IPFT, the junior partner of the Bharatiya Janata Party- led alliance government in Tripura, during the past two days met Union Tribal Affairs Minister Jual Oram and Minister of State (Independent Charge) in-charge of Ministry of Development of North Eastern Region Jitendra Singh and raised various demands, including NRC and more constitutional power to the TTAADC.

The Nagaland unit of Janata Dal (United) in a press release said like Assam, a similar exercise must be undertaken in Nagalnd for the detection and deportation of "illegal immigrants" by updating the NRC in the state.