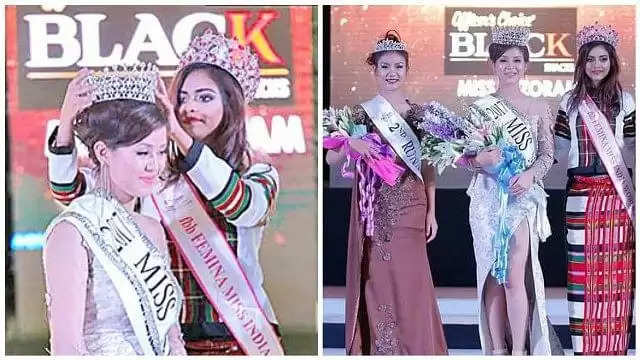 AIZAWL, March 13, 2017:  Rody H Vanlalhriatpuii was crowned Miss Mizoram 2017 on Friday night, to be the first woman from southern Mizoram to win the title. Rody was crowned by Femina Miss India 2016 Priyadarshini Chatterjee during the grand finale of the beauty pageant at Mizoram University's Multipurpose Hall.

She also won three subtitles – Miss Talent, People's Choice and Best Gown and was selected for the top prize from among 16 finalists.

Hailing from Lawngtlai town in southern Mizoram, she walked home with Rs 1 lakh cash plus numerous gifts from sponsors. Rody, who has just completed master degree in social works from Mizoram University, started modeling while in college. She had been named Miss Zirtirt Residential Science College and Best Female Model at Alcheringa Festival in Guwahati in which she represented Mizoram University.

Miss Mizoram beauty pageant was first organised by the Mizoram Journalists Association in 1984. After a decade, a weekly magazine called Lelte Weekly took it over.

After nine years of hiatus, Miss Mizoram pageant was held at Aizawl in 2014 and took another break for three years until the Zonet Cable TV Pvt Ltd took it over from this year.

After the auditions the final 16 were selected. These 16 girls competed in preliminary swimsuit, talent and a fashion show.