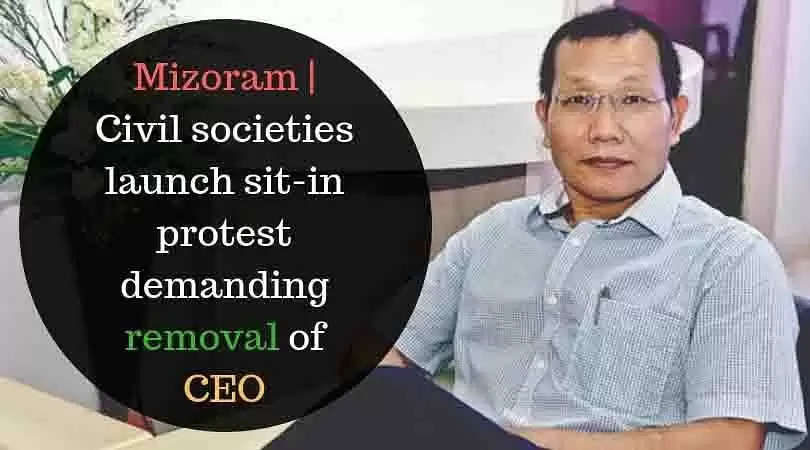 AIZAWL, November 6, 2018: Pressure mounted on the authorities and especially the central government and the Election Commission as thousands of Mizo students, social activists and common people including women took to the streets here on Tuesday and 'Gheraoed' the office of the Chief Electoral Officer S B Shashank in poll-bound Mizoram here to protest his style of functioning.

The NGO's body has announced that Mr Shashank, who is being seen as taking a pro-Brus stance and is also responsible for transfer of a Mizo IAS officer as Home Secretary, would not be allowed to attend office.

Volunteers sat with banners and raised slogans against Mr Shashank. "People of all age are gathered here today. It is a protest day, it is the question of Mizo identity and our fight," said L. Zoramsanga, 45.

A large number of squatted on the road at Treasury Square near CEO's office singing local 'Mizo patriotic song'.

Mr Shashank did not come to office yet, a source said but declined to divulge about his where about due to "security reasons".

The YMA and other civil society bodies have appealed to the owners of the commercial vehicles "not to allow use of their trucks" to transport central paramilitary forces from 'outside' to Mizoram.

The NGO Coordination Committee also appealed to the Federation of Mizoram Government Employees and Workers (FMGEW) to support the agitation and cease work from Tuesday.

Pressure seemed to be mounting on Election Commission, which had ordered replacement of a Mizo IAS officer and former Principal Home Secretary Lalnunmawaia Chuaungo last week, on Tuesday deputed a three-member headed by a Mizo IAS officer from Jharkhand to visit the state.

Mizoram goes to the polls on November 28.

In view of the complex situation arising out of the demand for the ouster of Chief Electoral Officer (CEO) S B Shashank and the NGOs body threatening to 'gherao' his office from Tuesday morning, the Election Commission has deputed a three-member high level team to Mizoram to assess the ground situation.

According to official sources here, the special Election Commission delegation will visit Aizawl on Tuesday and "have discussions with senior officers of the state government and representatives of the Joint NGO Coordination Committee" and try to resolve the impasse.