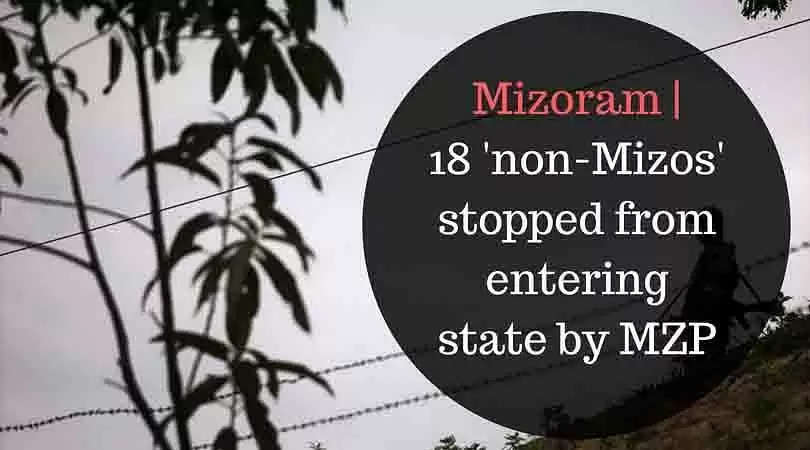 AIZAWL, August 21, 2018: The apex student body of Mizoram, the Mizo Zirlai Pawl which has been policing the state's border at Vairengte in Kolasib district of Mizoram, has sent back 18 non-Mizos from Assam, who were not included in the Assam National Register of Citizen.

Upon the behest of the sub-divisional officer of Vairengte, the Mizo Zirlai Pawl has called off their boundary policing after the volunteers were guaranteed that the civil and police administration would take the matter in utmost strictness.

Reports from Vairengte at the Assam-Mizoram border said that the MZP volunteers and the police personnel at the check points were joining hands in nabbing the non-Mizos, without proper documents, trying to cross over to Mizoram.

"Among the 150 non-Mizos who were sent back to Assam, 18 of them were not included in the Assam National Register of Citizen, and the rest of them do not have requisite documents and have operating as illegal traders in Mizoram," a MZP source from Vairengte said.

The MZP also issued a statement and had requested all local authorities to check illegal entrants, saying that a sizeable population from Assam, not included in the register of citizens, were trying to enter Nagaland, Manipur, Meghalaya and Mizoram.

"We appealed to all the larger NGOs and the local authorities to remain vigilant at their respective localities to check the illegal entry into our state," MZP stated.